The Drawing Room is typically the room in a house where guests and visitors are entertained. Drawing rooms were previously known as ‘withdrawing rooms’ or ‘withdrawing chambers’ which originated in sixteenth century.

The fabrics in this room are vintage glazed and block printed English and French chintzes and have been chosen to recreate the style of the rooms as they appeared in the 19th century family photographs. The Drawing Room picture hang reflects the Edward Ledwich description in his 1789 “Antiquities of Ireland!” when this room was the Presence Chamber or Alcove. 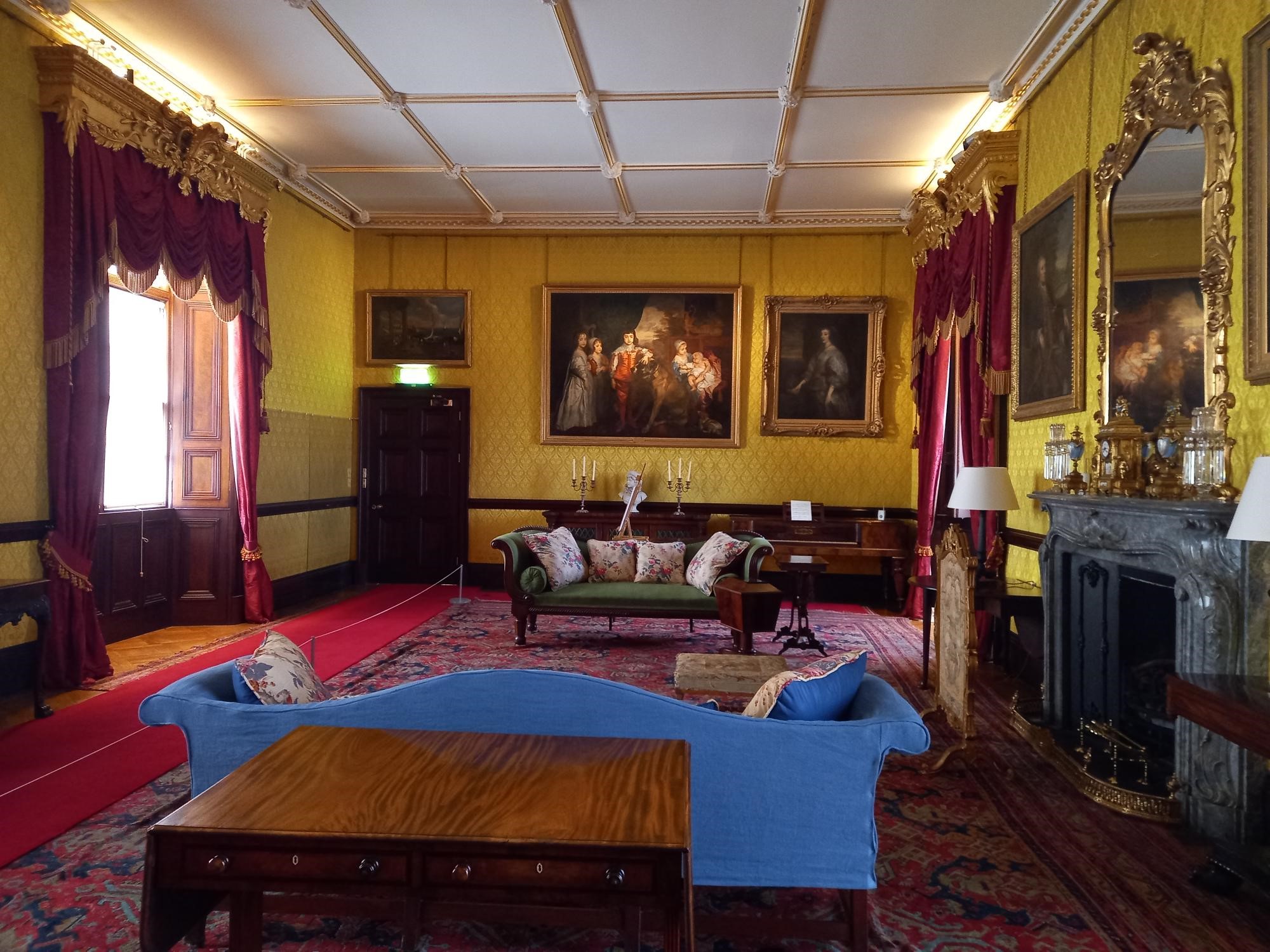 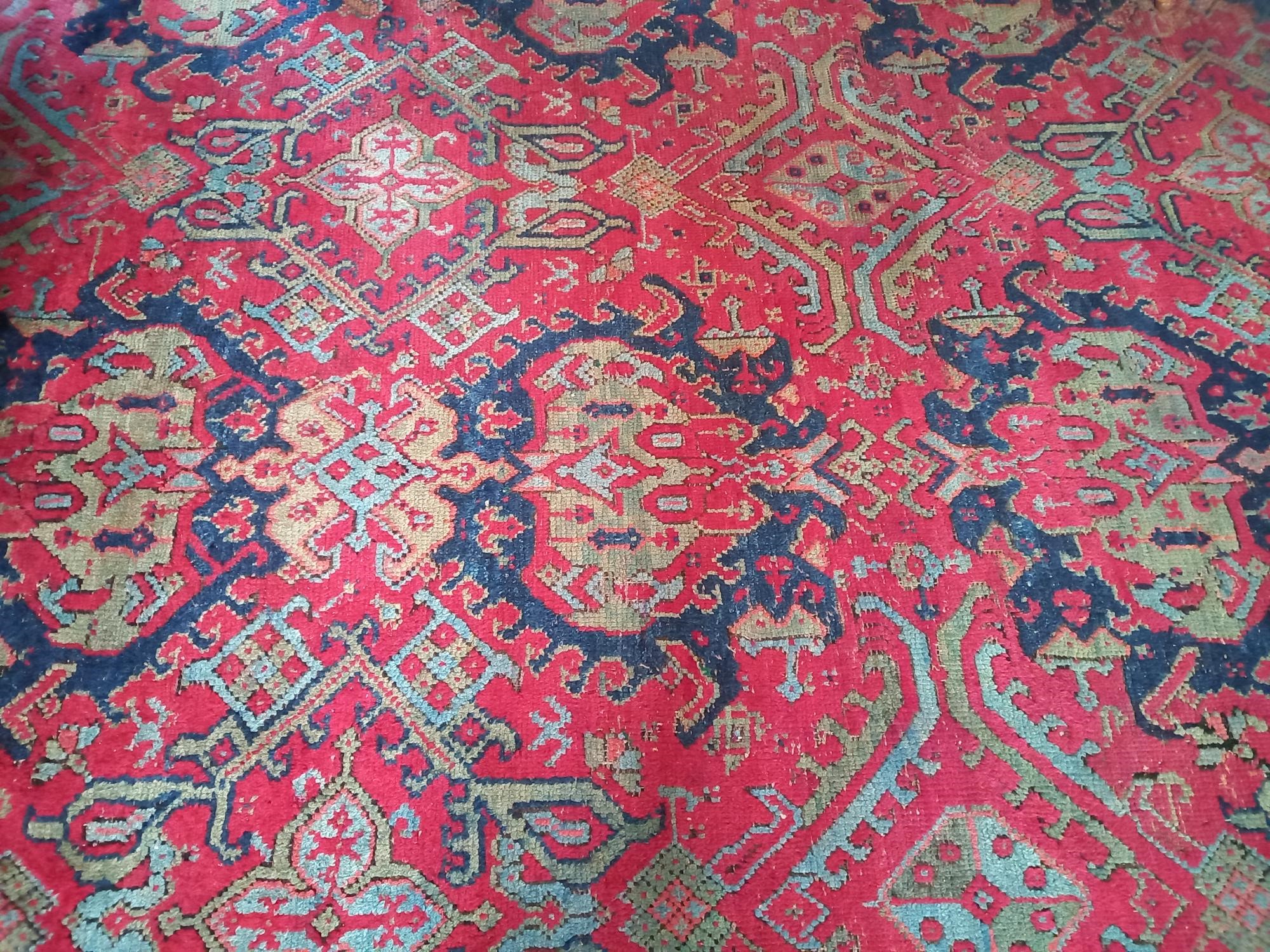 This is a late 19th century Ushak rug and is similar to that the one shown in the 19th century William Lawrence collection photographs of the Tapestry Room.

Ushak Carpets are handwoven in the city of Uşak in Turkey. Uşak was a major centre of rug production from the early days of the Ottoman Empire. There was a renewed appreciation for Persian rugs in the 19th century and the Ushak rugs became highly fashionable.

Ushak rugs are generally woven in a method known as the Ghiordes knot or the Turkish knot: where coloured weft yarn passes over the two warp yarns and is then pulled through between them and then cut to form the pile. 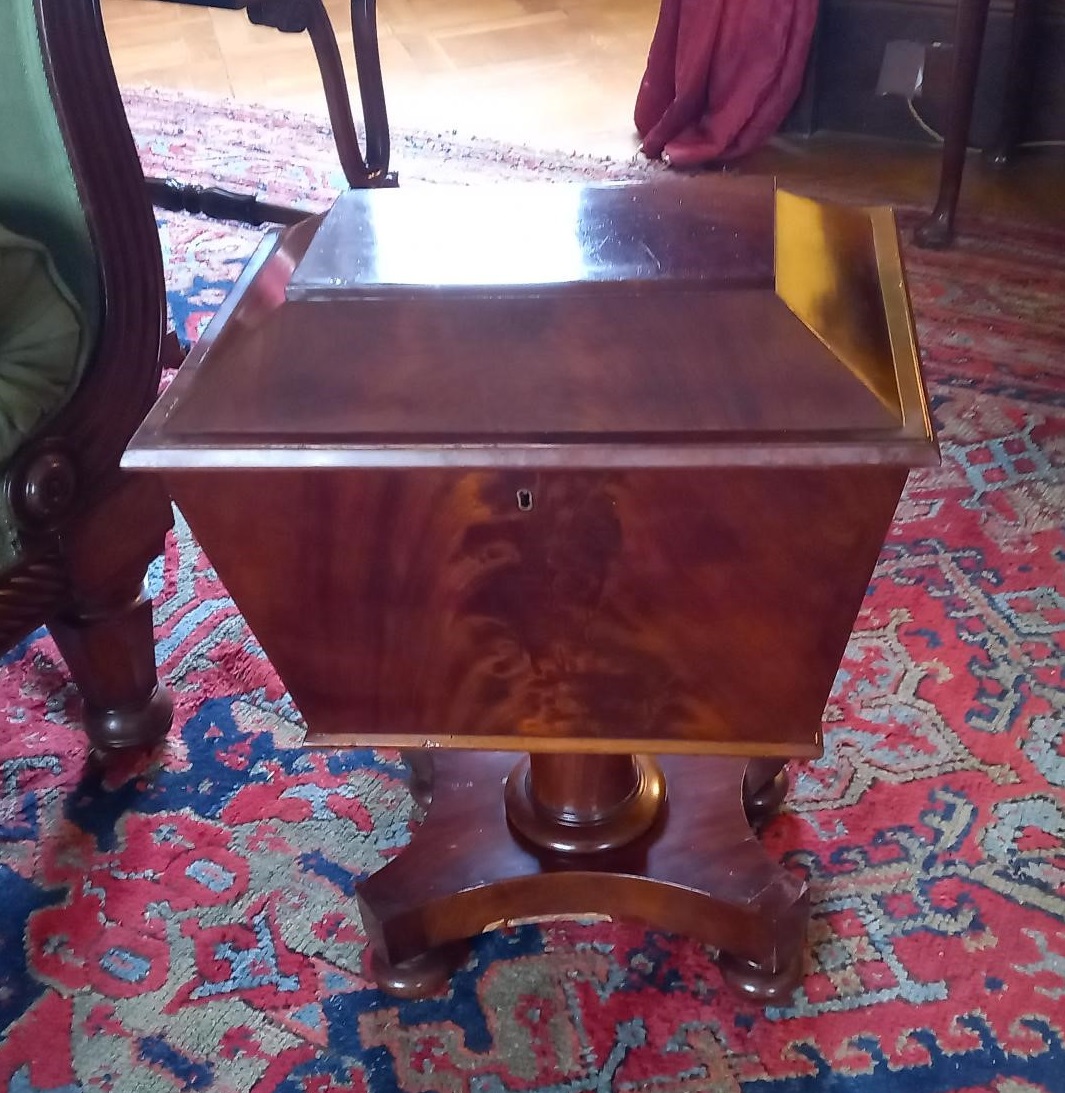 Tea was introduced to the British Isles by Queen Catherine of Braganza during the reign of Charles II, it soon became fashionable but also hugely expensive.  Containers storing the valuable loose tea leaves were made to fit in with the rest of the lavish furniture in  drawing-rooms or other reception rooms.

Teapoys comprise of a  box attached to a tripod base and were developed in the mid 18th century, first in India, and then by British cabinet makers. The box was a fitted inside as a tea caddy, used for storing loose tea. The name, strangely, doesn’t derive from the word “tea”, but from the Hindi phrase meaning “three footed”. 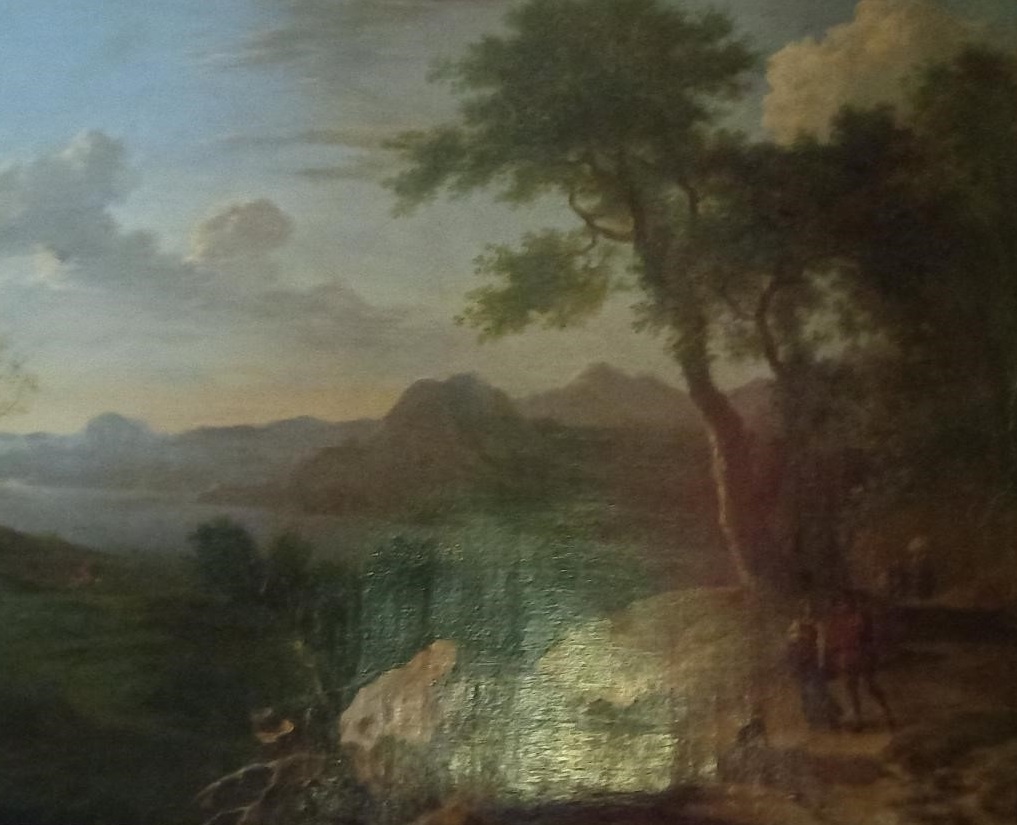 River stretches from the left middle-ground horizontally across the canvas. Two groups of two figures and a dog walk along a path towards the right foreground carrying baskets and bundles.
A plaque with ‘H. Swanevelt & FA Woerden 1642’ inscribed. 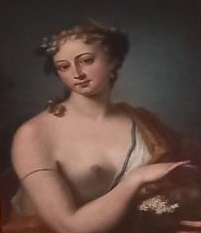 Originally called Autumn. A semi-draped female figure wearing ears of wheat in her hair – the usual attribute of Ceres, Goddess of Plenty – and bearing a basket filled with summer fruits. Possibly the painting described by Edward Ledwich as “Autumnus” hanging in Mrs Butler’s dressing room at Kilkenny Castle.

Paintings such as this, produced as a series illustrating the four seasons, were popular during the 18th century. 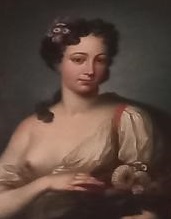 Originally called Summer. A semi-draped female figure wearing flowers in her hair – the usual attribute of Flora, Goddess of Spring – holding a bouquet of auriculas and dahlias. Possibly the painting described by Edward Ledwich as “Ceres” hanging in Mrs Butler’s dressing room at Kilkenny Castle.

Paintings such as this, produced as a series illustrating the four seasons, were popular during the 18th century. 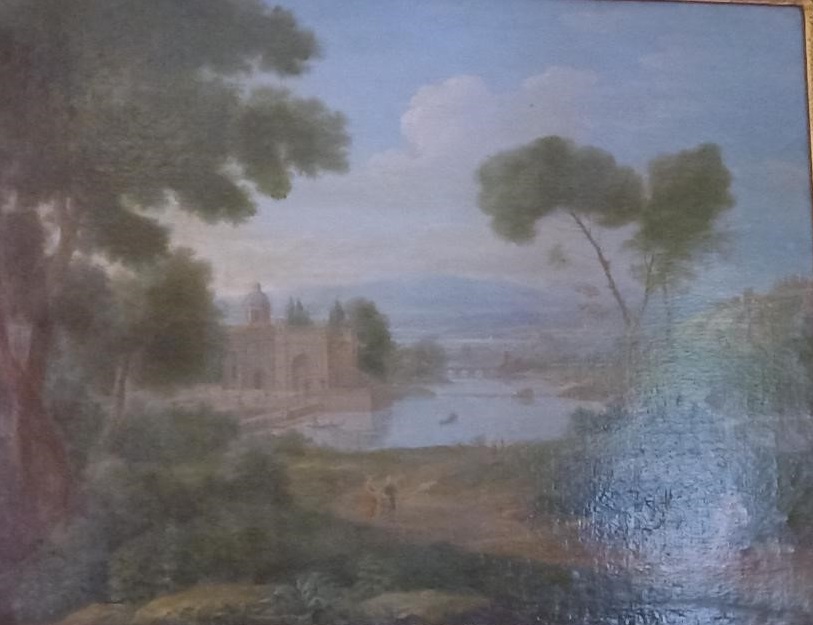 Lake in centre middle ground. Small figure groups in fore and middle ground. Classical building in background with trees and foliage flanking the left-hand side of the canvas. Perelle is the name on a plaque in the frame.

Eleanor was the daughter of Nicholas Morres of Seapark Court, Co. Dublin, and of Lateragh, Co. Tipperrary, and of Susanna, daughter of Richard Talbot of Malahide Castle. She  married Walter Butler, de jure 16th Earl of Ormonde, in 1732. After Walter’s death in 1783, she moved  into the Dower House, today Butler House, across the road from the Castle.

Lady Ormonde is shown seated in a landscape on a stone seat. Hunter has based the pose and composition on a portrait of Lady Caroline Russell by Sir Joshua Reynolds, engraved by James McArdell in 1760. In common with the companion portrait above, this painting illustrates the tradition of reusing poses as practiced by many fashionable portrait painters. Here the pose of Lady Ormonde can be traced back to Sir Peter Lely in the seventeenth century. It was also used by Kneller, and probably others, before being engraved by McArdell. The portrait is painted on a pale grey ground, which accounts for the pearly tones of skin and costume. It serves as an example of one of the many variations encountered in Hunter’s work.

Walter was a cousin of John Butler, de jure 15th Earl of Ormonde.  He was the only son and heir of john Butler of Garricken and Frances, daughter of George Butler of Ballyragget.  In 1732 he married Eleanor Morres.  He inherited the Ormonde titles in 1766 which he did not assume but took up residence at Kilkenny Castle. Walter, whom remained a Roman Catholic, exercised no political role but undertook the restoration of the Castle and also built the Stable block across the road from the Castle, today the Design Centre and National Craft Centre, and the Dower House, today Butler House.

Walter Butler is shown seated with his dog in a formal garden landscape, with a small temple and another building in the background. This portrait is painted on an ochre ground, which can be seen through the blue of the coat, and accounts for the high complexion of the sitter’s face. An Irish artist, Hunter enjoyed a large portrait practice, and his work can be very variable. He often used engravings of works by Reynolds, Hudson, and other fashionable English painters as a source for his poses. Another feature of his work is his reuse of poses for different sitters – a common practice among portrait painters since the seventeenth century. The pose used in this portrait of Walter Butler is identical (in reverse) to that used for his Hon Christopher O’Brien (Dromoland Castle), which was painted about the same time (c.1765). 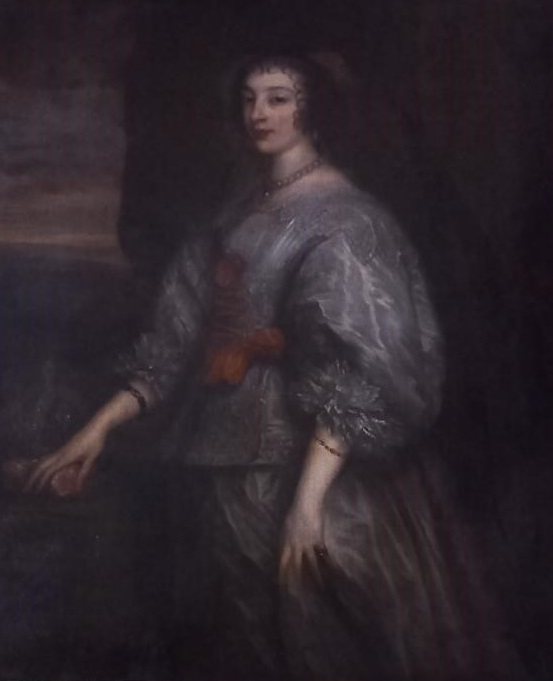 Henrietta Maria was the daughter of Henri IV of France and Marie de Medici. She was the wife of Charles I of England and mother of Charles II and James II.

This painting was formerly called “Duchess of Orleans”. This is a copy, with slight variations, after an original portrait by van Dyck, painted in 1632. 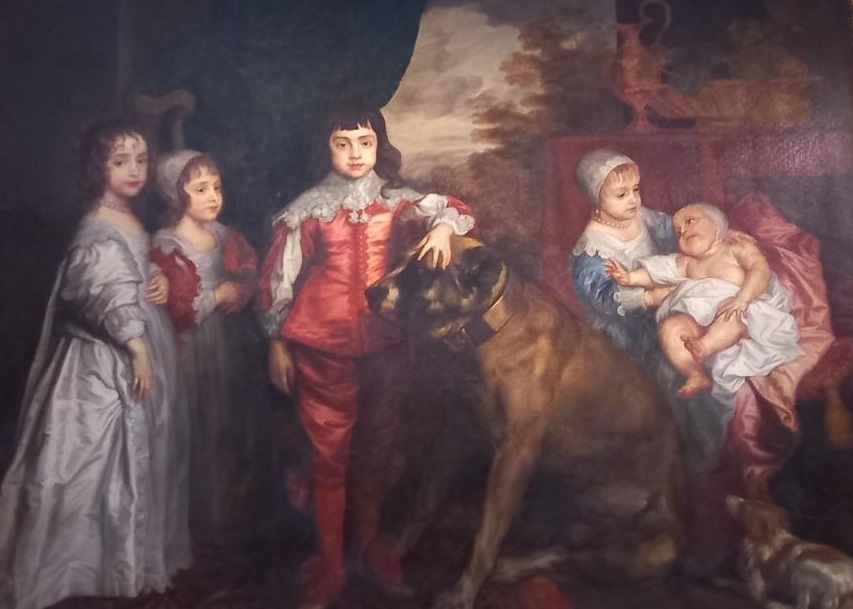 Five eldest children of Charles I

The original, commissioned by Charles I and painted by van Dyck in 1637, is hanging in the Queen’s gallery at Windsor Castle, UK.  The painting breaks with the tradition of presenting children as miniature adults. 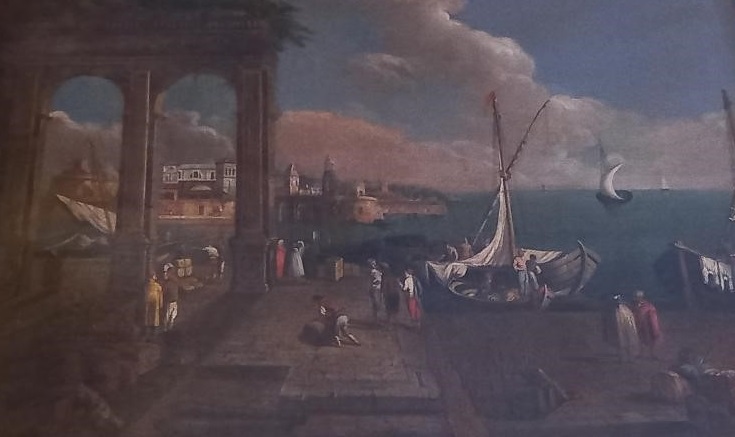 An imaginary port scene, not Venice, with figures in the foreground and a town in the background. This work, except for the figures, is close to port scenes painted by Thomas Patch (1725-82), an English artist who lived in Rome, and painted similar scenes and caricatures for visiting Grand Tourists.

In painting, a capriccio means particularly an architectural fantasy, placing together buildings, archaeological remains and other architectural elements in fictional and often fantastical combinations. 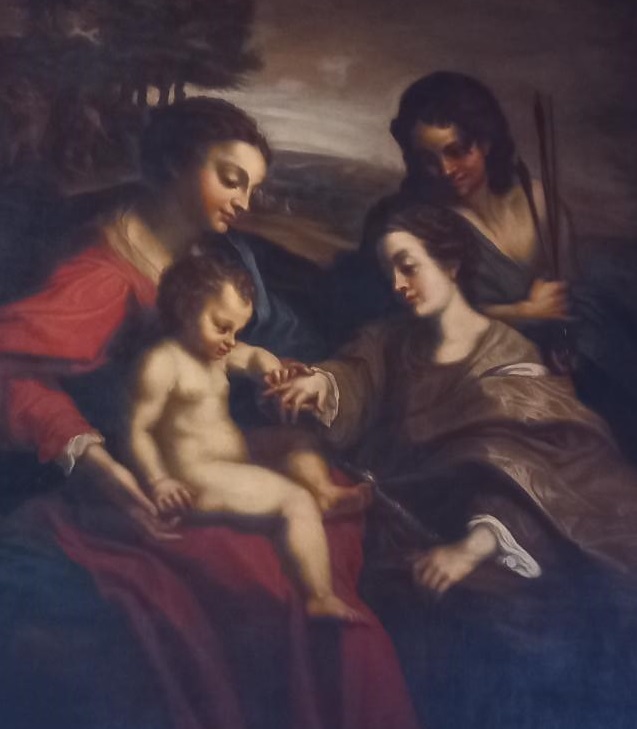 Madonna and Child with saints John the Baptist and Catherine of Siena. The Christ child is placing a ring on the finger of the saint’s right hand to celebrate the marriage of her soul to him. This is a copy after the original painting now in the Louvre.