Despite its infamy, the organisation known as the Hellfire Club was relatively short-lived in Ireland. The group was founded in Ireland in 1737 and effectively disbanded by the early 1740s. However, the organisation still looms large in the public consciousness. If you ask people what they know of the Hellfire Club, many may describe a masonic-like group of rich aristocrats who enjoyed drunken orgies where they gambled and practiced dark arts like murder and human sacrifice. But how much of this is fanciful imagination, and how much has a basis in fact? Did such a group exist? If so, who were the members? What did the group believe or do? The Hellfire Club was one of many groups of the same name that were appearing across Ireland and Britain in the 17th and 18th centuries. These clubs were established in order to serve as meeting places for some of the most wealthy and powerful people in both Irish and British society. In a time of deeply ingrained religious belief and an extremely restrictive culture, young men would join the club to delve into a more decadent lifestyle of alcohol, sex, and outlandish parties. With society upholding a condescending view on such practices at the time, rumours began to spread amongst the public of unnatural behaviour occurring in the club. Many members were rumoured to have been practicing dark magic and performing satanic rituals.
The Hellfire Club was an organisation very much of its time, a period when Enlightenment Philosophy caused many to question the strictures and restraints of society. An engaging example of the mindset of the period comes from the accounts of Thomas ‘Buck’ Whaley who was born nearly thirty or so years after the Hellfire Club prowled the streets of Dublin. Born into a wealthy Dublin family in 1768, he described himself in a manner that would probably have made him a good candidate for membership to the Club:
I was born with strong passions, a lively imaginative disposition and a spirit that could brook no restraint. I possessed a restlessness and activity of mind that directed me to the most extravagant pursuits; and the ardour of my disposition never abated until satiety had weakened the power of my enjoyment.
The Irish Hell Fire Club was founded around 1737 by Richard Parsons, 1st Earl of Rosse, and James Worsdale. Evidence of the identities of other members comes from a painting by Worsdale entitled The Hell Fire Club, Dublin, now held by the National Gallery of Ireland, which shows five members of the club seated around a table. The five men are Henry, 4th Baron Barry of Santry (who was tried and convicted for murder in 1739) Simon Luttrell, Lord Irnham; Colonel Henry Ponsonby; Colonel Richard St George and Colonel Clements. Most of their meetings occurred in Dublin city centre at the Eagle Tavern on Cork Hill, near Dublin Castle. Accounts of the club’s meetings claim that members drank “scaltheen”, a mixture of whiskey and hot butter, and that they left a chair vacant at each gathering for the Devil.] The club’s mascot was a black cat.

Conclusion
Ill-behaved and arrogant as they were, these young men were also well-educated and practitioners of science, with many of the Dublin Hellfire Club members being Trinity or University of Cambridge graduates. Members held discussions in philosophy and science, placing them well out of line with the church and the more traditional members of Georgian society, whom they regularly came into conflict with. Montpelier Hill may be one of Dublin’s best known haunted sites, but it’s also worth acknowledging the members of the club that once met here as being far ahead of their time intellectually. Controversial as they were, the idea of them being satanic delinquents stemmed from a poor understanding of science and intellectualism by society at the time. 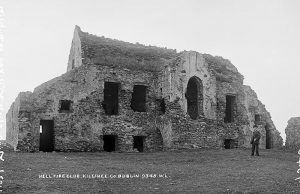