The Medieval Foundation and Ground Floor

The medieval foundations date from the 13th century. Access extends down a short flight of steps and under the Rose Garden Terrace, then winds underneath the castle to the West Tower, which was originally called the Strongbow Tower.

Base of West Tower—the Undercroft

In this circular chamber, the massive depth of the 13th century walls is evident. There are two plunging arrow loop windows and the remains of willow wicker “centering” on the ceiling, a process used to support the vault during its construction.

This room was reinstated to its original 1830s decorative order in the 1990s. The walls still have some original sections of hand painted Chinese wallpaper from 1810. Social etiquette of the 19th century prescribed that ladies withdrew to the withdrawing room after dinner, while the gentlemen indulged in unladylike habits of cigar smoking and drinking port and brandy.

This was the formal dining room of the Castle until the1860s when it became the billiard room. The house of noblemen commonly had two dining rooms, one for formal occasions and one for every day use. The walls are hung with a hand blocked wallpaper known as Vernis Versailles.

In the 19th century, the corridor was extended on both sides from an earlier roofed carriage entrance originally called a porte-cochère. It added a Gothicised dimension to the external appearance and internally connected both the east and west wings.

Throughout the lifetime of the castle the names and functions of rooms were altered as fashions changed. The reception is shown in the 19th century plans as the “serving room”.

There has been an entrance hall here at least since the 17th century rebuilding of the castle. The north doorway through the massive curtain wall was remodelled on two occasions in the 19th century.  The black and white stone floor is laid with Kilkenny Black Marble and sandstone, and is thought to date to the 19th century.

The 19th century mahogany staircase was designed and made by the local firm of R. Furniss and Son, in Kilkenny. It leads to the Tapestry Room, then turns to give access to the first floor.

This room is in the North Tower with its thick 12th century walls. The keyhole shape of the ceiling shows where a square tower was added on to the medieval round tower during the early 15th century. The tapestries are part of a series titled Thee Story of Decius Mus woven from designs by Peter Paul Rubens, after 1616.  They depict the story of Decius Mus a Roman Consul who sacrificed himself to enable the victory of the Romans against the Latins, as recounted by Livy. 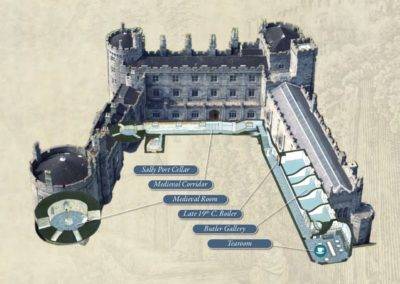 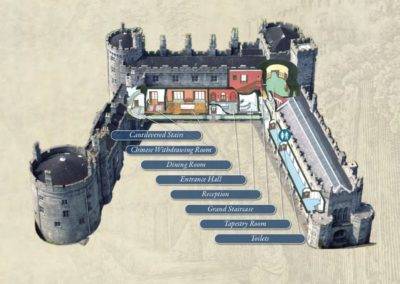 Today the Ante Room, Library and Drawing Room occupy the space as it was refurbished in the late 19th century. 17th century history records that it was in these state apartments that James Butler, 1st Duke of Ormonde, received the Papal Nuncio Giovanni Battista Rinuccini during the Irish Confederate Wars of that century.

This small chamber and the room below were constructed where an earlier stone staircase was situated. It is elliptical in shape as the outline of the suspended ceiling shows.

­The interior decoration is a faithful recreation of the furnishing style of the mid to late 19th century. Thanks to a fabric remnant found behind a skirting board, the French silk poplin on the walls was reproduced in its original pattern and colour by the Firm of Prelle of Lyons in France. The restoration team were fortunate in finding the original receipt for the carpet in the family papers, and were able to trace the original company who had retained the design records.

­The third room of the suite is decorated in the same style and has surviving paintings from the original Ormonde collection.

These stairs are constructed from Irish Wicklow granite and date to the early 19th century. ­ They provide access to the west tower and centre block on all Floors.

This was built during the early 19th century building programme carried out by the architect William Robertson and was constructed on earlier foundations.

Made of Cararra marble and designed by J. H. Pollen in a quasi-medieval style with foliage carving attributed to Charles Harrison. 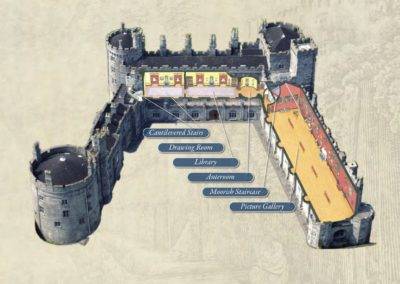 In the 16th & 17th centuries, this was a Gallery. At that time the family had a collection of 500 paintings, the largest in Ireland.

This room provides a fascinating glimpse into 19th Century childhood. Period- appropriate furnishings including children’s chairs, cradle and cot complete the room along with everything you would expect a privileged child of the time to have.

The “Lady of the house” used this private space for reading, dealing with social correspondence and private visits. This room contains a selection of 19th Century prints and miniature portraits of various family members.

­This is one of the balcony suite of bedrooms in the North Tower, and is directly over the Tapestry Room. Th­is suite was allocated to King Edward VII and Queen Alexandra in 1904.

­This bedroom is connected to the Blue Bedroom by double doors and is decorated with a modern reproduction of a hand-painted Chinese wallpaper.

Based on Moorish architecture, this provides a major staircase in an awkwardly shaped building. It is carved with naturalistic foliage and small animal details. 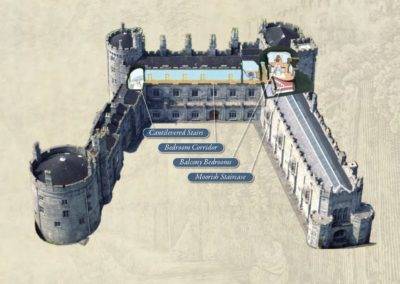