Viscountess Thurles – writing from Iron Acton – to her husband’s grandfather, the earl of Ormonde

your lordshipe was pleased to at my request to engadgedg your prommis to mee that you would not put anye of my fathar and mothars frinds or sarvants out of thar farmes but sence your Lord beinge [in] ireland through the instigation of some mallitious persons that hath incensed your Lordship against them hath Caused you to turne them oute: and upon your Lordships nobll promis I did asshure them all by letars that, they should keepe theire farmes [they] being Content to pay your Lordship as much as anye others and thay haveing deserved soe well from mee, I cannot in honner see them suffer: tharfore I beesech your Lordship to grant this my request as your Lordship would have me obay your commands in anye outhar things: I am advertised by a letar from my Cousen weames that your Lordship keepes backe some of the land of bennis bridg from them which belongs to them by thayr lease which I am perswaded they would not seeck if it weare not there due I am very sorye to see your Lordship should fall in contriversie with my kinsmen about soe poure a thing for I did think your Lordship had beene reconsiled to them soe leving all to your Lordships noble Consideration who I know will grant my Just and resonablle request soe with my dute and sarvis to your lordship I rest

your lordships loving grandchild to Command 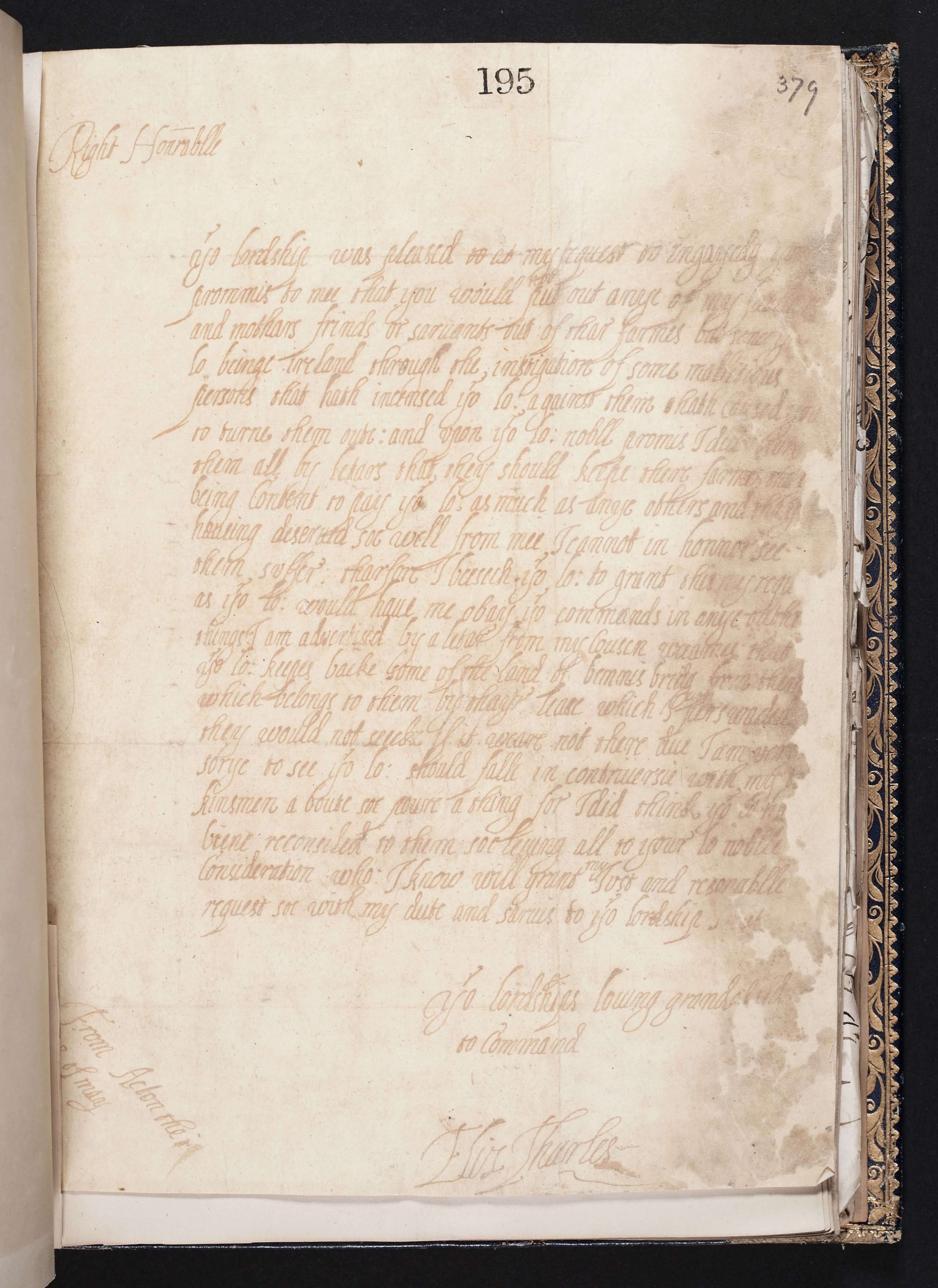 Letter written by Elizabeth from Iron Acton to her husband’s grandfather, the earl of Ormonde.

Reproduced courtesy of the National Library of Ireland (NLI, Ormond Papers, 2486, no. 195) 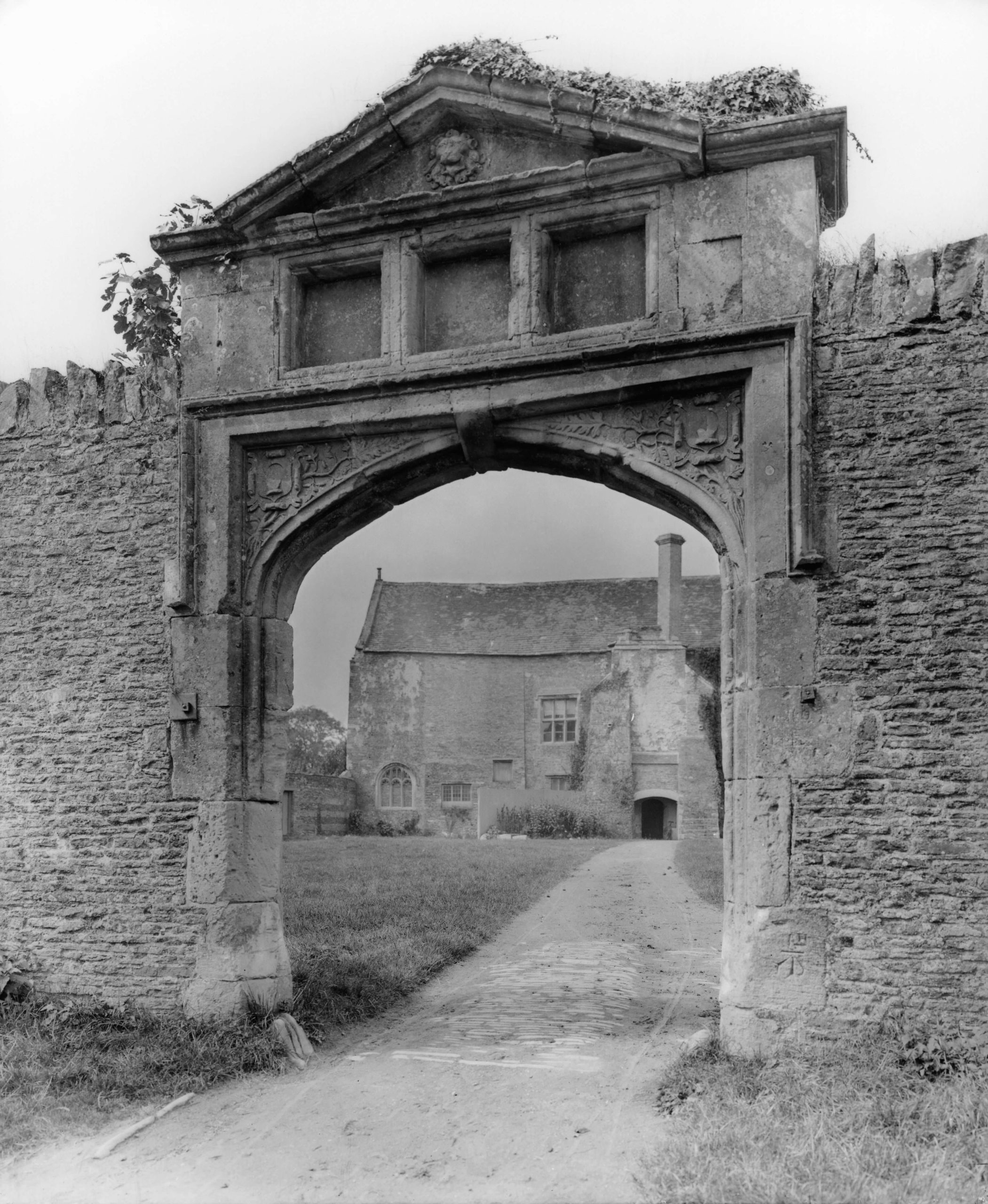 Iron Acton, Gloucestershire, England, was the ancestral home of Elizabeth Poynz, Lady Thurles,  mother of James Butler, Viscount Thurles. Elizabeth and James spend the early years of their marriage there. 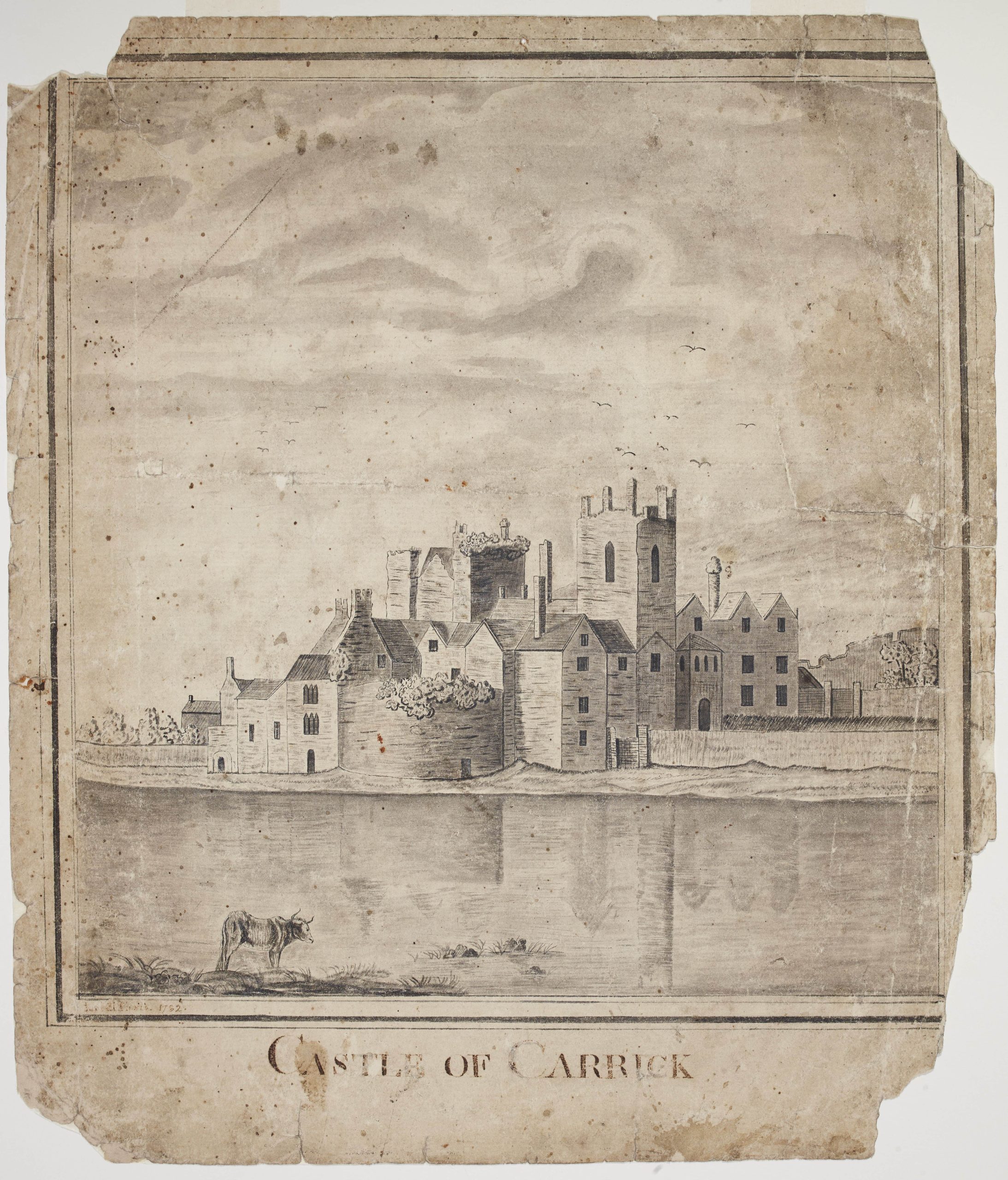 The manor and land of Carrick were granted to Edmund Butler, earl of Carrick by the king of England in 1315. Ormond castle as we know it today is the result of the buiding works undertook in the 16th century by Thomas Butler, 10th earl of Ormonde.  Members of the Butler family lived there until the last quarter of the 17th century. Walter Butler, 11th earl of Ormonde, grandfather to Elizabeth’s husband, lived there until his death in 1633.

Reproduced courtesy of the National Library of Ireland

This letter reveals the confidence and self-efficacy of the young Viscountess Thurles, and the continued importance of her paternal family, the Prestons, following her marriage.

Elizabeth Butler, née Preston, was descended from the earls of Ormonde through her mother, also Elizabeth Butler, the sole surviving legitimate child of Thomas Butler, 10th Earl of Ormonde. Her father was Richard Preston, Baron Dingwall, later earl of Desmond, a noble of the Scottish court and favourite of King James VI and I. Born in London on 25 July 1615, Elizabeth was the only child of the marriage. Her mother was involved in an inheritance dispute that led to her being awarded more than half of the Ormonde estate, but not the title, which went to Walter Butler, 11th Earl of Ormonde, the recipient of this letter.

The 13-year-old Lady Elizabeth Preston inherited her mother’s estate after the deaths of both her parents in 1628 – her mother died in Wales and her father drowned as he was returning from her funeral. Now Baroness Dingwall, having inherited her father’s Scottish title, the orphaned girl was taken as a ward of the court and placed into the care of Henry Rich, 1st Earl of Holland. She married her second cousin, James Butler, at Christmas the following year, becoming Viscountess Thurles.

This, Elizabeth’s earliest extant letter, dates from around 1630 when she was a young wife of about 15. It was written from Iron Acton in Gloucestershire where she and her husband spent the early years of their marriage with relatives of his mother. The letter was written to her husband’s grandfather, Walter Butler, the 11th Earl, in Ormond Castle, Carrick on Suir. He had lost Kilkenny Castle and much of the Ormonde estate in the inheritance dispute with her mother, so the letter required some tact.

The young viscountess writes to Walter with deference and respect but she also asserts her rights and responsibilties as heiress. She complains of the eviction of some of her late parents’ tenants and intercedes on behalf of her paternal cousins. There was a clause in her marriage agreement that specified that Danefort and Bennettsbridge in Co. Kilkenny were to be granted to Patrick Wemyss and Richard Christy, both nephews of her father, for a 21-year term. They were required to pay the earl £100 for each of the first two years of their tenure and thereafter present a pair of gloves worth 20s. to Elizabeth every Michaelmas. The viscountess reminds the earl of the terms of the agreement and indicates her continued loyalty to her father’s family following her marriage.