The Month of January and Kilkenny Castle.

Located in the Main Hall of Kilkenny Castle today, there are a pair of beautifully decorated bronze urns originally designed for a garden. The pair are very fine copies of two bronze urns designed in the Louis XIV style by Claude Ballin for Versailles. The bronze urns were copied from a larger design made for marble parapets for the gardens at Versailles. Claude Ballin (1615 – 1678) goldsmith to Louis XIV was commissioned to design the urns and they were modelled by Legendre, Magniere, Tuby and Angulier and cast by Duval. Numerous copies were made by foundries in the 19th Century and the original bronze urns can still be seem in Versailles today.

Each of the urns are in a baluster form and have a raised double-headed Janus handles. The sides are boar masks and bands of shells, oak leaves and Greek Key decoration. Both of the urns have a wonderful blue-green patina.

As described the urns have Janus handles. Janus was a Roman god; the ancient Greeks had no equivalent god in their own pantheon. Janus presided over the beginning and the end of conflict, and hence war and peace. The gate of a building in Rome were named after him, were opened during a time of war and closed during a time of peace. As a god of transitions, he had functions relating to birth, to journeys and exchange, he was also concerned with travels, shipping and trading.

The name Janus in Latin means ‘arched passage or doorway’ and comes from the Proto-Italic word iánu meaning ‘door’. It is cognate with the Sanskrit word yáti ‘to travel’, the Lithuanian word jóti, ‘to ride’ and ultimately the Irish word áth, ‘to ford’. Because of his association with doors, we derive the modern word ‘Janitor’ form the Latin ‘ianitor’.

In the Middle Ages Janus was the symbol of the port city of Genoa, whose Medieval Latin name was Ianua.

Today of course, he gives his name to the first month of the year January, the beginning of the year. The origin dates back to the legendry king of Rome Numa Pompilius (c.753 – 673); the second king of Rome after the Romulus the founder of the city. Numa in his regulation of the Roman calendar called the first month Januarius after the god Janus according to tradition and it is the oldest verifiable story known about the Janus and the creation of the month of January. 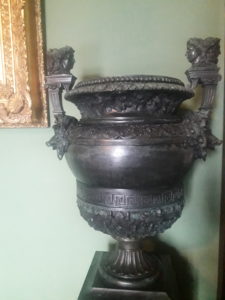