The Tapestry Room is in the North Tower with its thick 12th walls. The ceiling outlines the keyhole shape of this room, created by the addition of a square tower to the circular medieval tower during the 15th century . This great tower room shows how the medieval castle was transformed in the 17th century to become a magnificent baroque ducal palace. This room was called the Great Chamber in the 17th century and the walls were decorated with embossed and gilded leather hangings on the walls; a fragment of a late 17th/ early 18th century leather has been hung beside the door to give an impression of how rich the room must have been. In the 18th century, they were replaced by a set of tapestries. The Gothic style hand blocked wallpaper was reproduced by David Skinner from Malahide Castle, one of the very few examples of Irish produced wallpaper from the 18th century. The colour orange is an early 19th century burnt Sienna distemper known as Malahide Orange, which was also found at Malahide Castle. 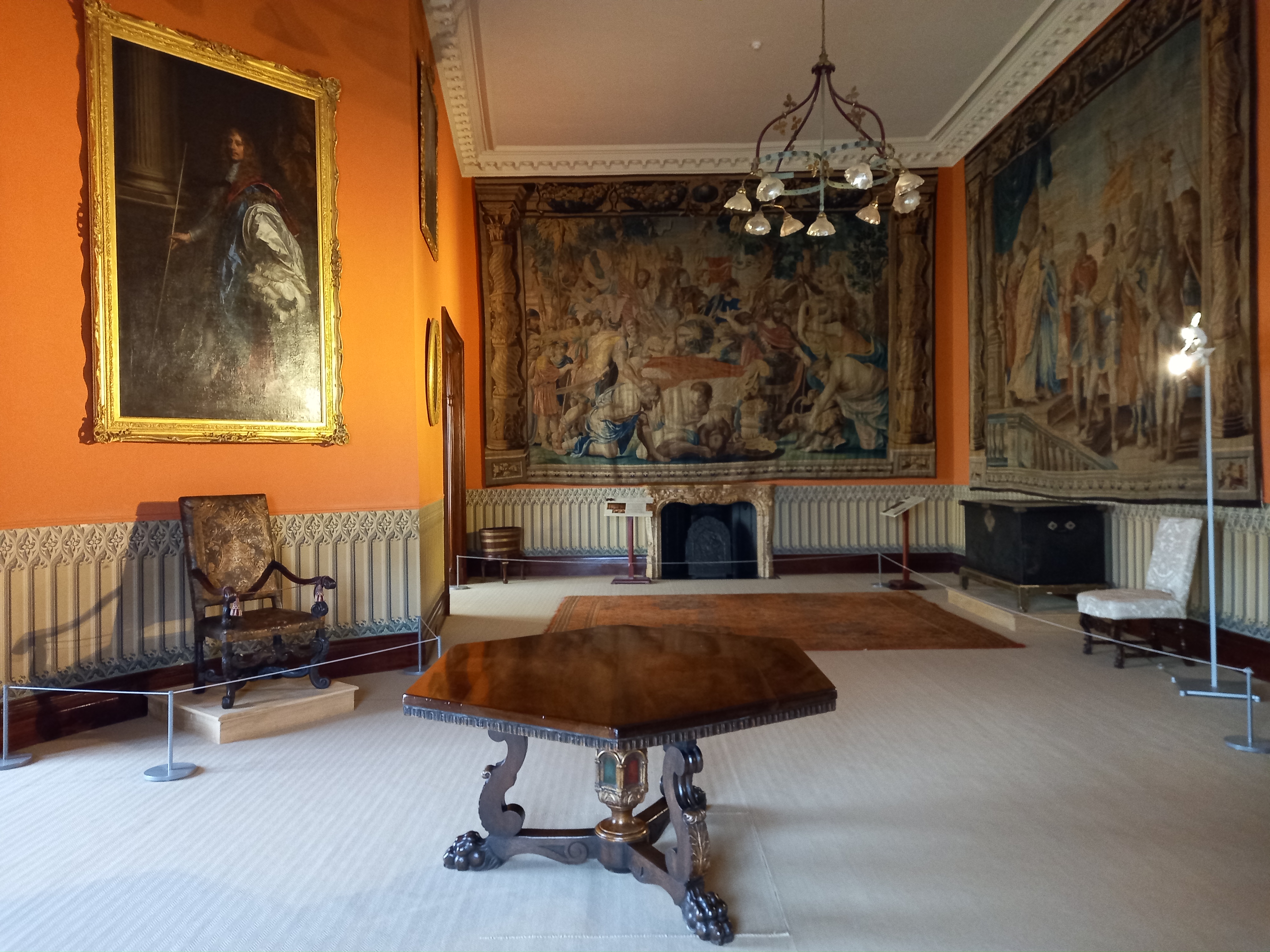 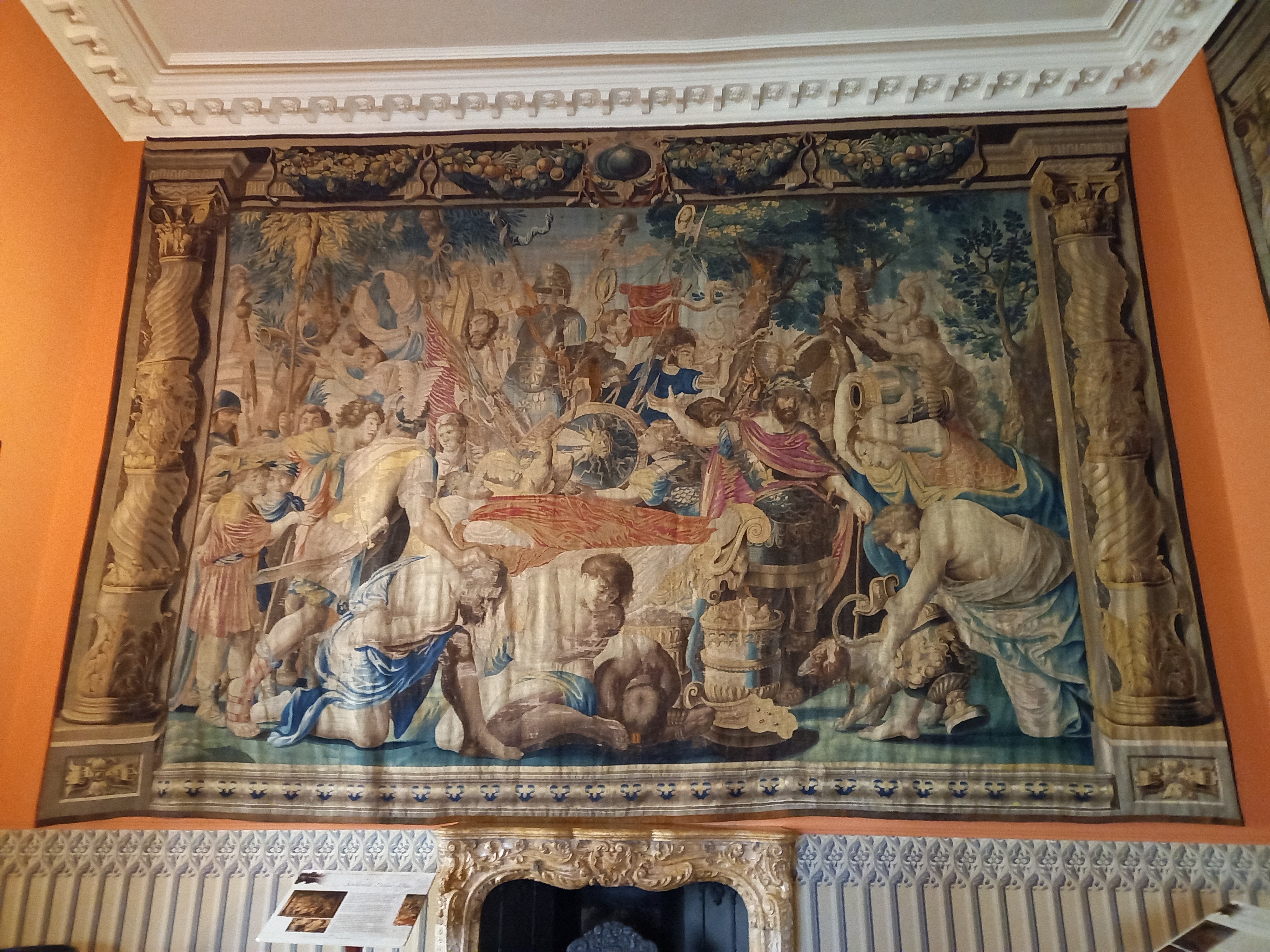 There are two tapestries from the “Decius” suite in the Tapestry room:

The tapestries are attributed to the workshop of Jan Raes, after designs by Sir Peter Paul Rubens Original of Kilkenny Castle, a Charles II walnut state chair covered with both early 18th and possibly 17th century leather with very colourful decorations on back. In the 1684 inventory were listed “four armed chairs, and thirty-two back chairs of gilt leather and walnut-tree frames”. A fine early black lacquer and chinoiserie decorated lift-top chest, with large engraved brass lock place, on a stand with short square legs. This travelling chest belonged to the Duke of Ormond and is an important remnant of the late 17th century furnishing of Kilkenny Castle.

Son of Charles I and Henrietta Maria. During the civil war in England, Charles played an active role and fought with the army. After the defeat of the royalist, he left England for France to join his mother. In 1649, after the execution of his father, he was proclaimed king of Edinburgh and later in parts of Ireland by Ormond. In 1660 the monarchy was restored.

Full-length, standing in robes of the Garter in a pose frequently used in the studio of Sir Peter Lely. The portrait has suffered severe paint loss, and it is difficult to be certain about the attribution. The carefully delineated folds of linen, and the treatment of textures in general, are similar to those featured in the work of John Michael Wright. Other than the pose, it does not resemble the work of Sir Peter Lely. It may be one of a group of portraits which were undertaken by Wright when he painted several works for Ormond in the early 1680s.

Born on the 29th April 1665 in Dublin Castle, he was the son and heir of Thomas Butler, Earl Ossory and Amelia van Beverweerd. He was educated in France and at Oxford. He inherited all of the Ormonde properties and titles, from both his grandfather and grandmother including her Dingwall title. Following his support of the Jacobite rising, he was impeached and fled to France. He lived out his life in exile, died in Avignon in France in 1745 and was buried in 1746 at Westminster Abbey.

Wearing armour with the blue ribbon of the Garter with the lesser George (a term used to describe the medal associated with the Order of the Garter), and a sash about his waist, Ormonde holds in his right hand a baton of command. A cavalry skirmish and buildings are to his left. The portrait appears to have been executed in the 1690s; the pose is similar to that used by both Sir Godfrey Kneller and Michael Dahl. An original portrait by Dahl which is very similar is in the Devonshire collection at Hardwick Hall. A portrait by Kneller is in the NGI. 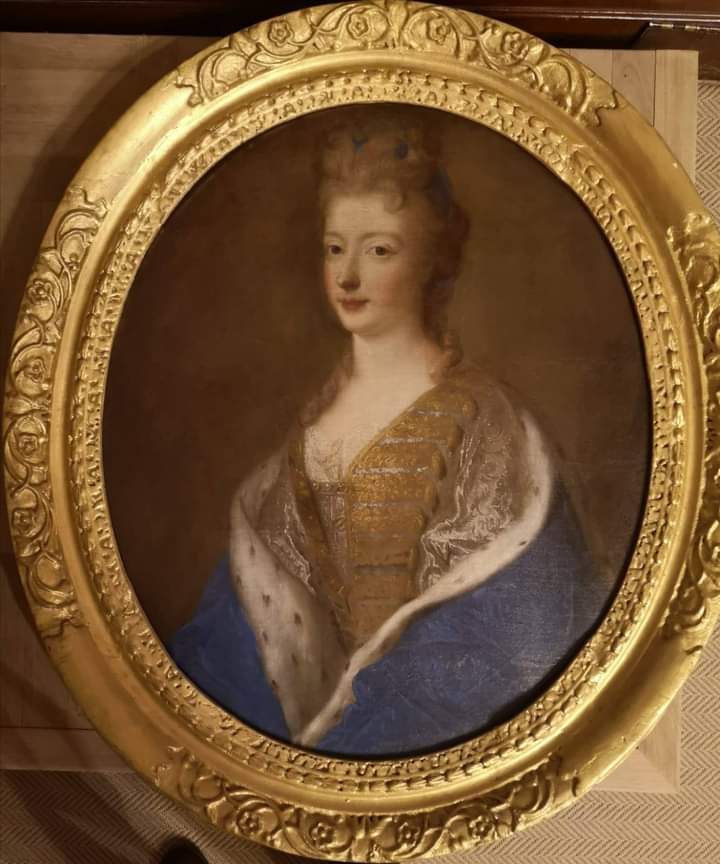 Countess of Lucan and Duchess of Berwick.

Oval, 1/2 length portrait. Sitter wears a yellow dress with a blue ermine-trimmed, blue wrap. It was possibly taken from a portrait painted on the occasion of her marriage to the Duke of Berwick at St-Germain-en-Laye

In the late 1620s, Wentworth was MP in opposition to the Crown, but was to become one of Charles I’s principal supporters from 1629 until his death. During his time in Ireland as Lord Lieutenant, Strafford sought to further royal interest, and in so doing he also managed to enrich himself. As a result of his manoeuvres and his own self-aggrandisement, he made many powerful enemies. His final effort on the King’s behalf-the formation of a standing army in Ireland to defend royal’s interest- was to lead to his ultimate downfall in 1640. Rumours spread that the army  was to be used to invade England. He was committed to the Tower of London, and in January 1641 was impeached for high treason. The King signed his death warrant, and he was executed on Tower Hill in May 1641.

Head and shoulders in armour, after a portrait by Sir Anthony van Dick painted in 1636. Van Dyck painted two portraits of the sitter in armour, one a full-length, the other a three-quarter-length. Numerous smaller copies were also made by studio assistants.

Wearing robes of the Order of the Garter, Ormond holds the wand of office of Lord Steward of the Household in his right hand. The portrait is probably that referred to in a series of letters written by Ormond’s agents, John Buck in England and Sir George Lane in Ireland, during the years 1662 to 1663. In a letter dated May 1663, John Buck wrote: ‘…the latter end of this month I shall send from hence a most excellent picture of My Lord Duke’s, I think you saw the face done before you went; by that time I am promised the Queen’s for my Lady Duchess to send along with it: Mr. Lilly tells me there is one very good at cappeinge [copying?] in Dublin, if not pray let me receive your farther commands; Mr. Lilly will presently part with the Duchess’ pictures for you, if you can procure any to bring directions from Her Highness to him for it.’ [HMC Ormonde Mss, iii, 55]
This is the finest extant portrait of the duke. The pose is striking, and seems to be unique to Ormond. The figure is poised to turn away as if to stride off the canvas, and the plumed hat in the sitter’s left hand adds an exuberant flourish to the image. The handling of the paint, particularly about the head, is typical of Lely’s work at this period. X-rays taken of the head of Sir John Harman from the series of Lely portraits of ‘Flaggmen’, painted during the 1660s, show similar brushwork and structure. Sections of the ducal costume may be a little slack, but Lely’s hand is evident in the lively painting of the head. The portrait was described by George Scharf, when he saw it hanging at Panshanger in England before 1875, as ‘a fine full-length picture’. A slightly larger version of the portrait was advertised for sale in Connoisseur in August 1971, and it was previously advertised for sale in 1969 as ‘Ex. Earl of Shrewsbury’. A poor copy is in the collection of the NGI (no. 4140, ex. Malahide Castle). 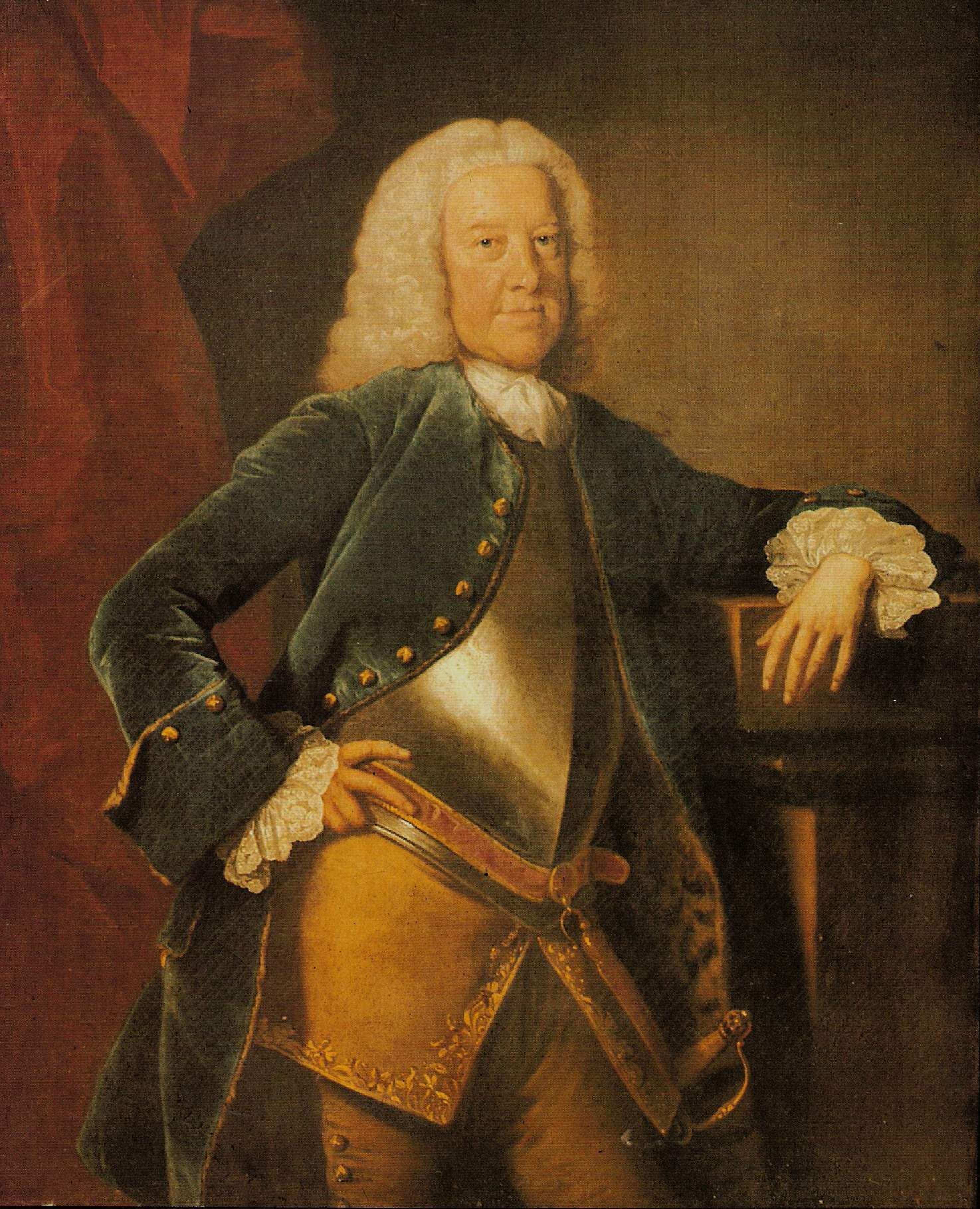 Born on 4th September 1671, he was the youngest son of Thomas Butler, Earl of Ossory and Amelia of Nassau and brother of the 2nd Duke of Ormonde. Arran was enabled by an Act of Parliament in 1721 to recover his brother’s forfeited estates.

Arran is depicted wearing a cuirass under a velvet coat. The pose of right hand on hip and left arm leaning on a stone ledge with mannered positioning of the fingers on both hands was used by Hysing in his portrait of John, Lord Perceval, 2nd Earl of Egmont, engraved by Faber in 1734. Arran was also painted by the artist Sir John Thornhill in the 1720s.

He was a soldier and Naval Commander, known as ‘Gallant Ossory’.  Born at Kilkenny Castle in 1634, he was the second but eldest surviving son of the Duke of Ormonde.  His childhood was spent at Kilkenny until he went with his father and brother Richard to England in 1647.  They then went to France, where he was educated at Caen and Paris at Monsieur de Camps’ Academy.  From 167 to 1660 he was in Holland where he married Amelia of Nassau, daughter of Lodewyk van Nassau, Heer van Beverweerd, a natural son of Prince Maurice of Nassau.  Ossory was a witness when James, Duke of York secretly married Anne Hyde in 1660.

Ossory enjoyed the favour and support of both King Charles II and his queen.  Because of his wife’s Dutch connections he was frequently sent on royal missions to that country.  In 1670 he conducted William of Orange to England.  John Evelyn, the diarist, was a close friend, who referred to him as ‘a good natured, generous and perfectly obliging friend’.  He died suddenly in 1680, possibly from food poisoning, at Arlington House in London.  He was buried in Westminster Abbey

Oval portrait, showing head and shoulders. Ossory is dressed in armour, wearing the blue ribbon of the Order of the Garter.