There has been an entrance hall here at least since the 17th  century rebuilding of the castle. The nineteenth century fire extinguisher check records it as the Diamond Hall. The north doorway through
the massive curtain wall was remodelled on two occasions in the 19th century. The black and white stone floor is laid with Kilkenny Black Marble and local sandstone, laid in the 19th century. This room has been redecorated using organic, naturally pigmented copper green paint. This colour is based on two Edwardian Irish Country house schemes; the Entrance Hall at Beaulieu, Co. Louth and the Saloon at Headford, Co. Meath. The room has been hanged with key portrait from the Butler family. A small piece of early 18th century painted and stamped leather is framed in one corner; this is reminiscent of the 1884 description  by George Henry Basset of the walls of the Entrance Hall being “richly decorated with old Spanish leather”. Leather wall hangings and printed gilt leather carpets were a feature of several of the Butler houses from the 17th century onwards and Kilkenny Castle had several rooms hung with this costly material. 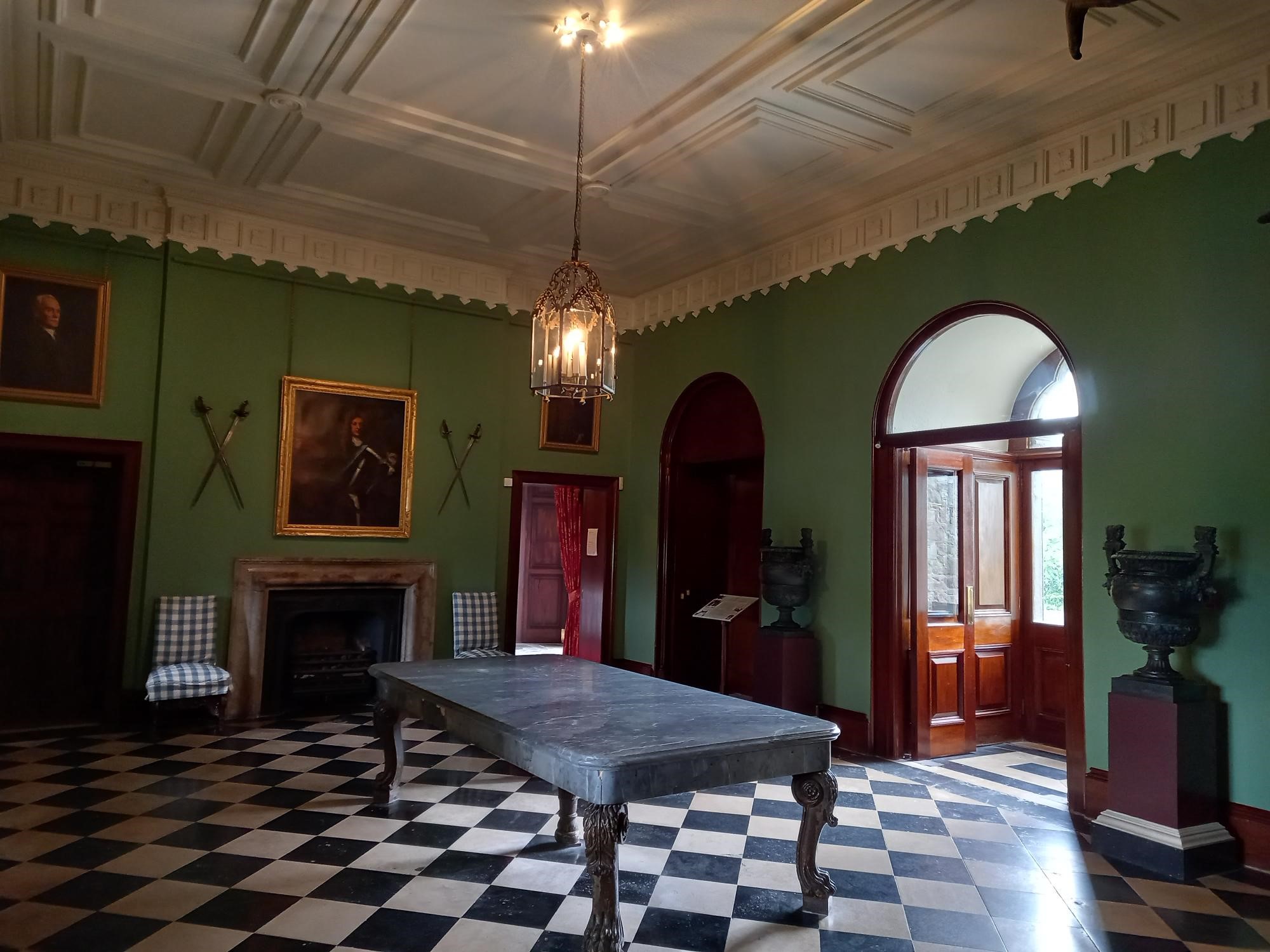 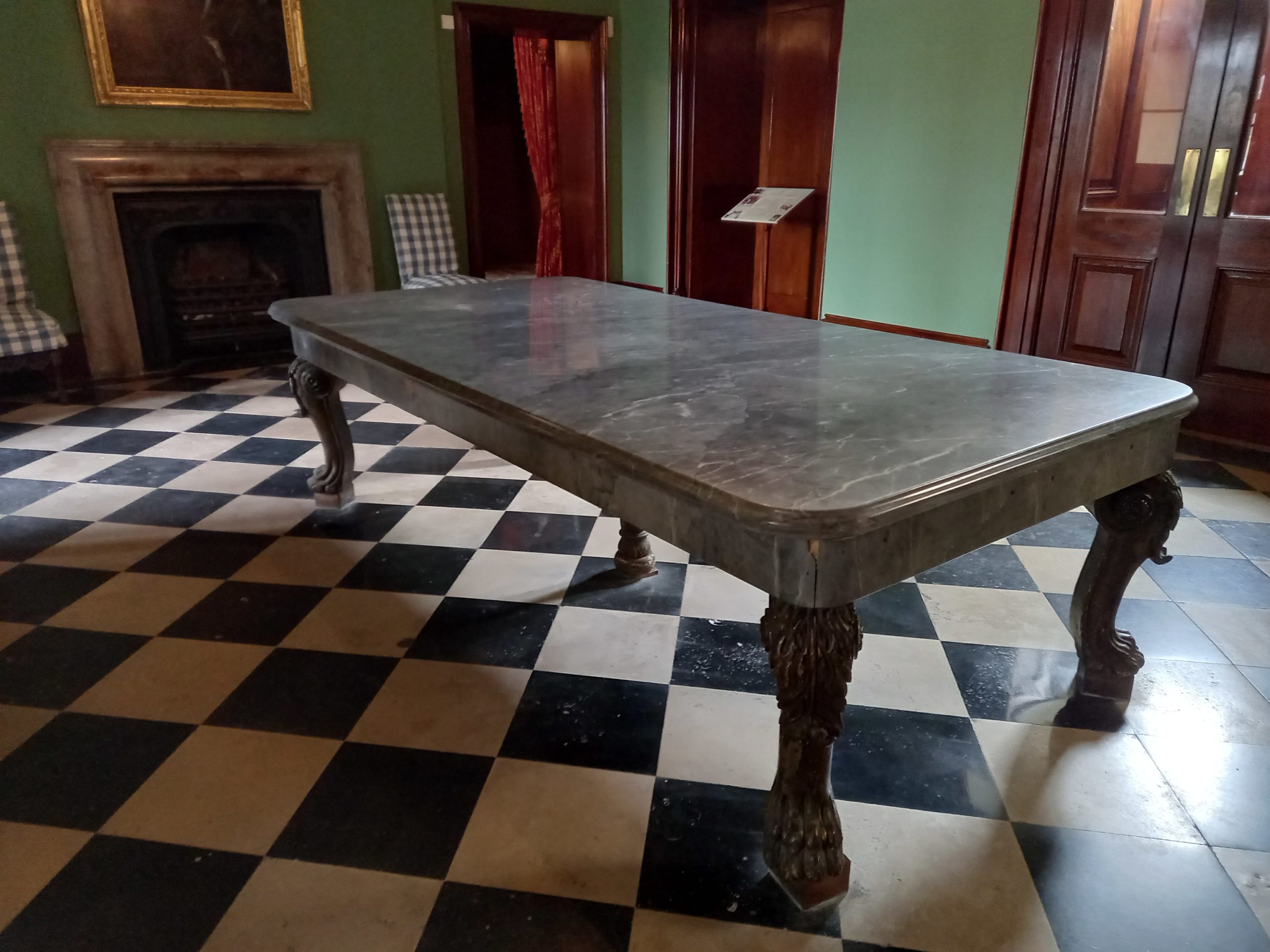 This large grey marble table is original to Kilkenny Castle and dates to the late 17th century. In May 1935, James Arthur Butler 4th  Marquess of Ormonde instructed his eldest son George to arrange the sale of the castle contents. Battersby’s Auction House in Dublin handled the auction which lasted 10 days.  This table was not sold but left behind in Castle in its original place. 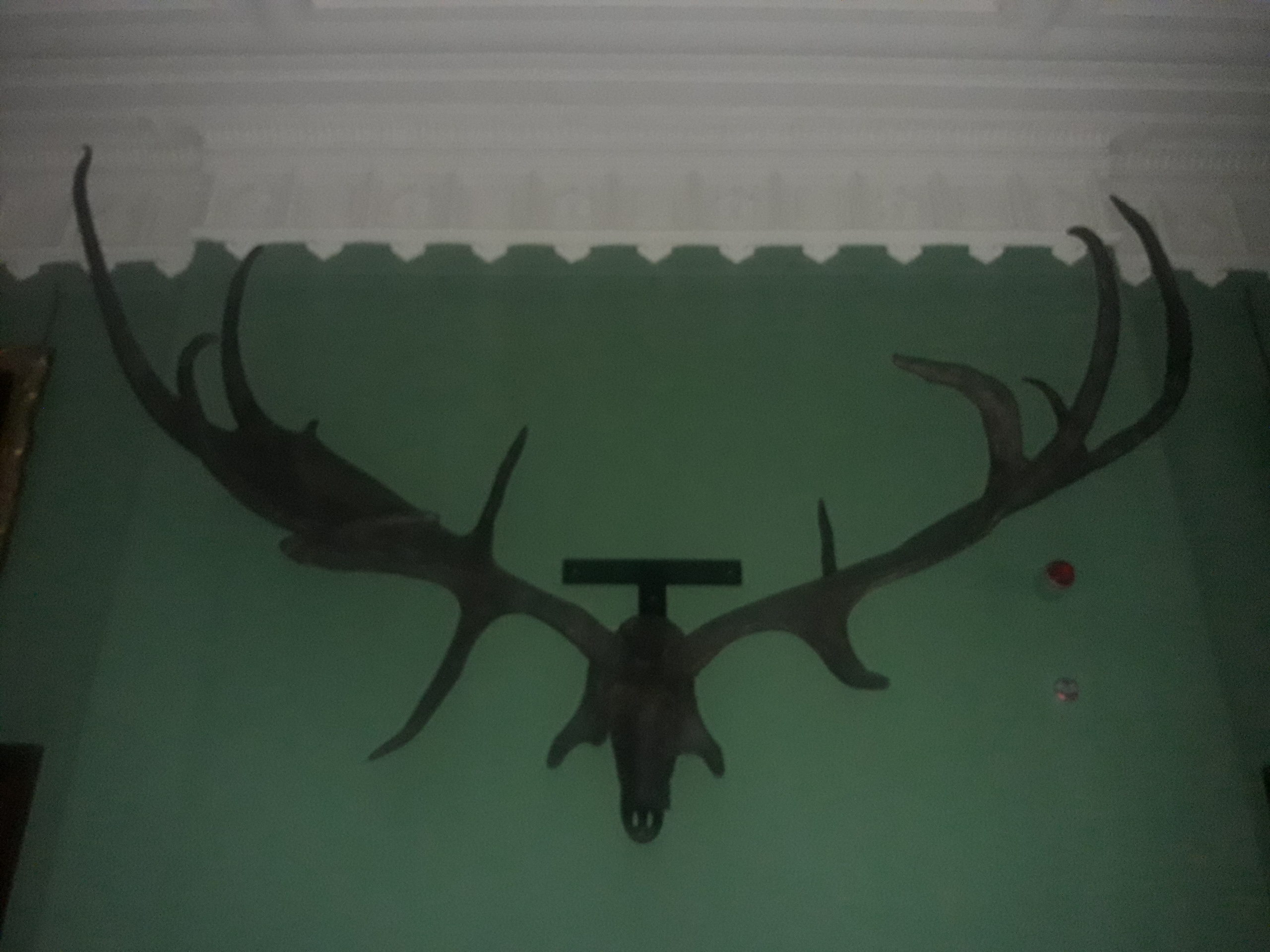 A fine set of  Irish elk antlers, dug from a Leitrim bog in the 19th century, are  displayed over the fireplace .  The Irish elk (Megaloceros giganteus) also called the giant deer or Irish deer, is an extinct species of prehistoric deer which lived during the Ice Age about 2,580,000 to 11,700 years ago . It  is one of the largest deer that ever lived.  Antiquities such as these were much sought after, and a lucrative trade existed in the acquiring of items of great age. In the 1935 Kilkenny Castle auction, lot 2467 in the “Lounge Hall” was ” a head of the Great Irish Elk”. 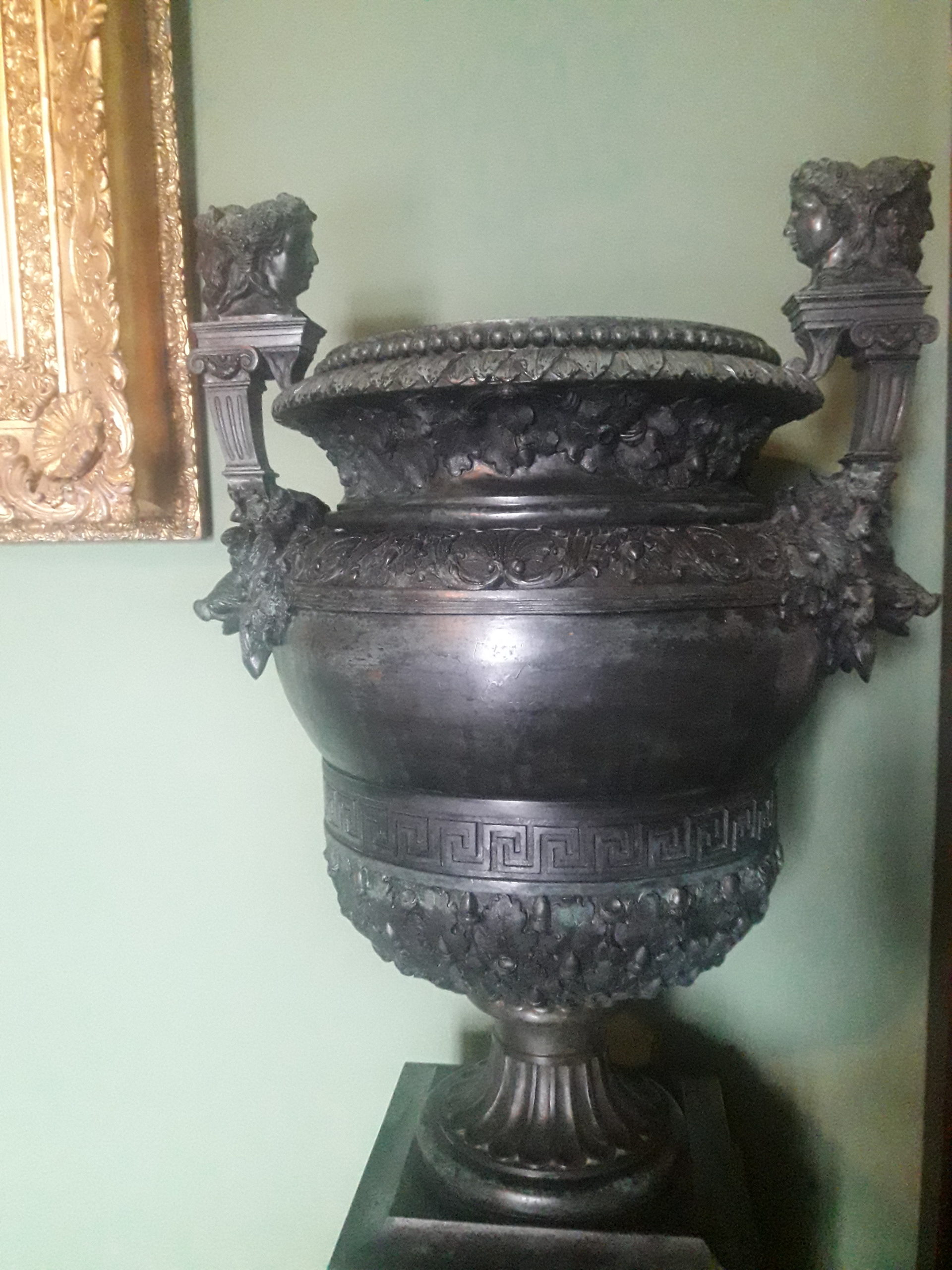 These very decorative urns are reputedly French and originals of Kilkenny Castle. They are thought to be part of a large collection which was brought from France by James, First Duke of Ormonde, on his return from exile on the Restoration of the Monarchy in England 1660. They would have adorned the formal gardens of the castle. These bronze urns are more than likely copies of the originals that, generally believed, were cast by Duval after a design by Claude Ballin, gold smith of Louis XIV. It is one of the thirteen different models on the marble railings that separates the Parterre du Nord and the Parterre d’Eau in Versailles.

There was no fewer than 28 swords and daggers displayed in the Entrance Hall prior to the 1935 auction. 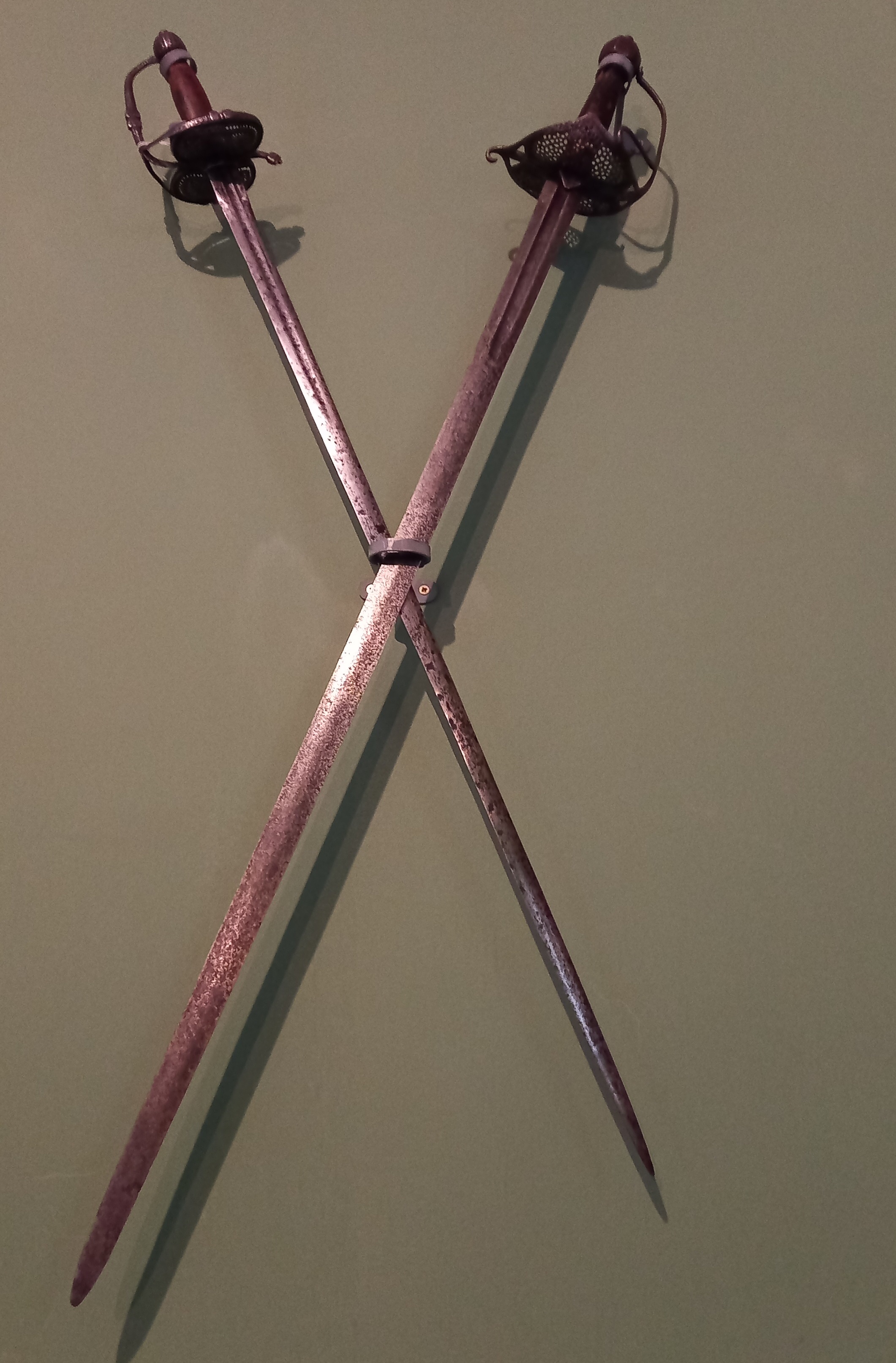 Typical munition quality weapon of unusual construction which could have still been in service by the 1680s.

Typical of a wealthy officers weapon for whom a stylish sword was just as important as a functional weapon. The 1st Duke of Ormond might typically have carried such a sword. 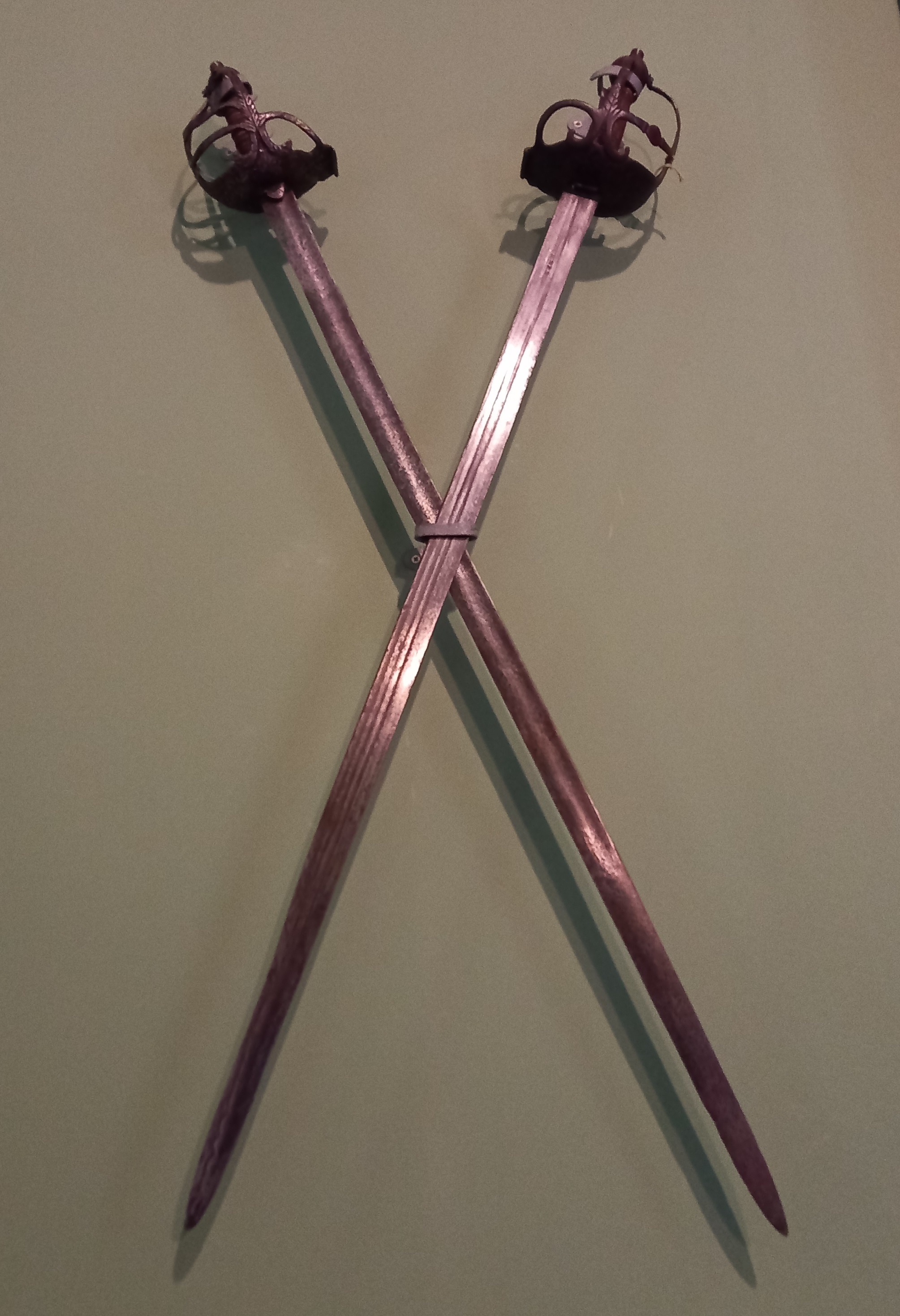 Both swords represent the period of the Commonwealth and Protectorate of Oliver Cromwell and the exile of Charles II. 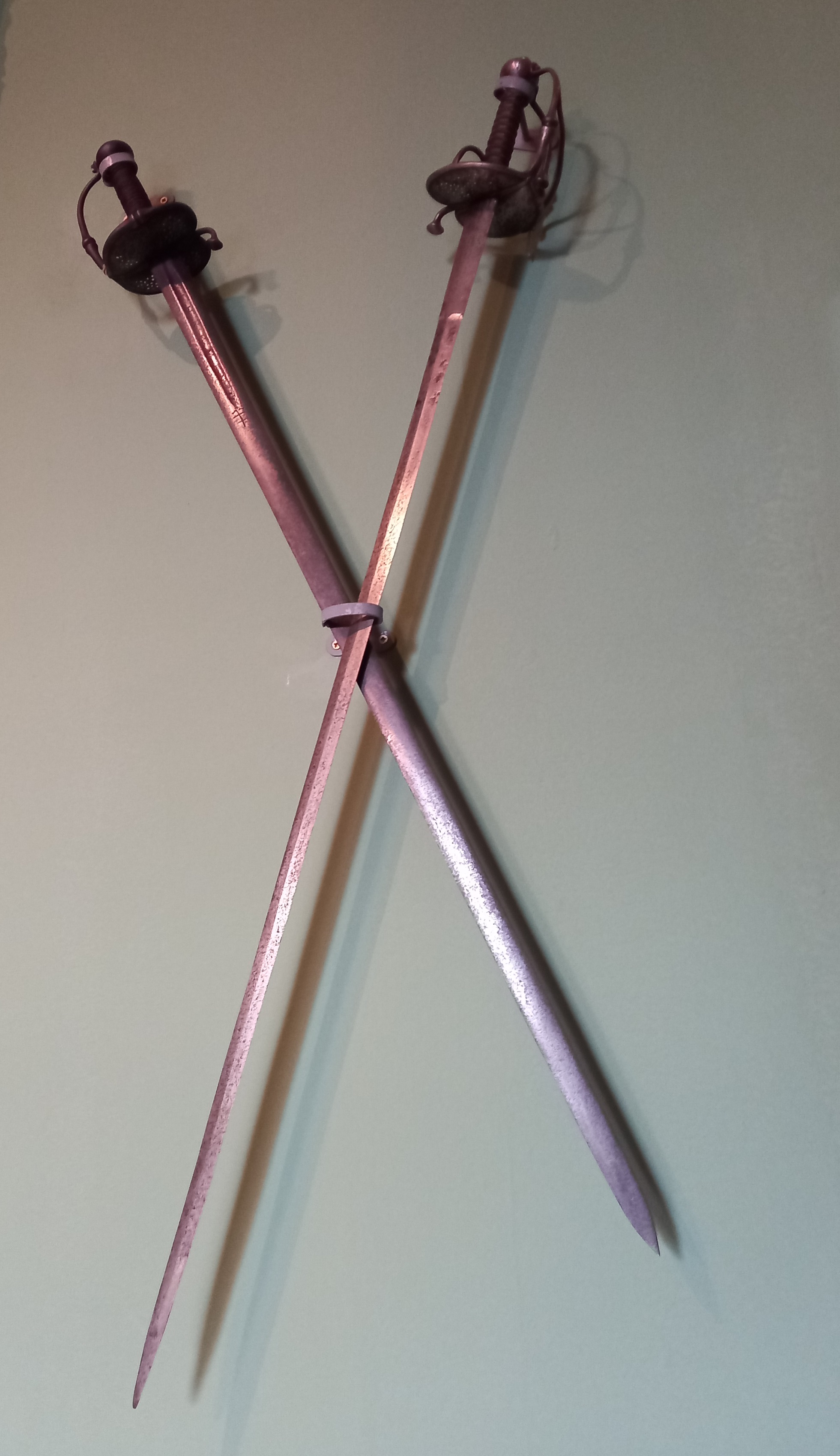 Both swords represent the English civil wars period and thereafter when they would have seen service in the wars against the Dutch and in the restoration period after 1660, when the Butlers were reinstated to their estates and titles. 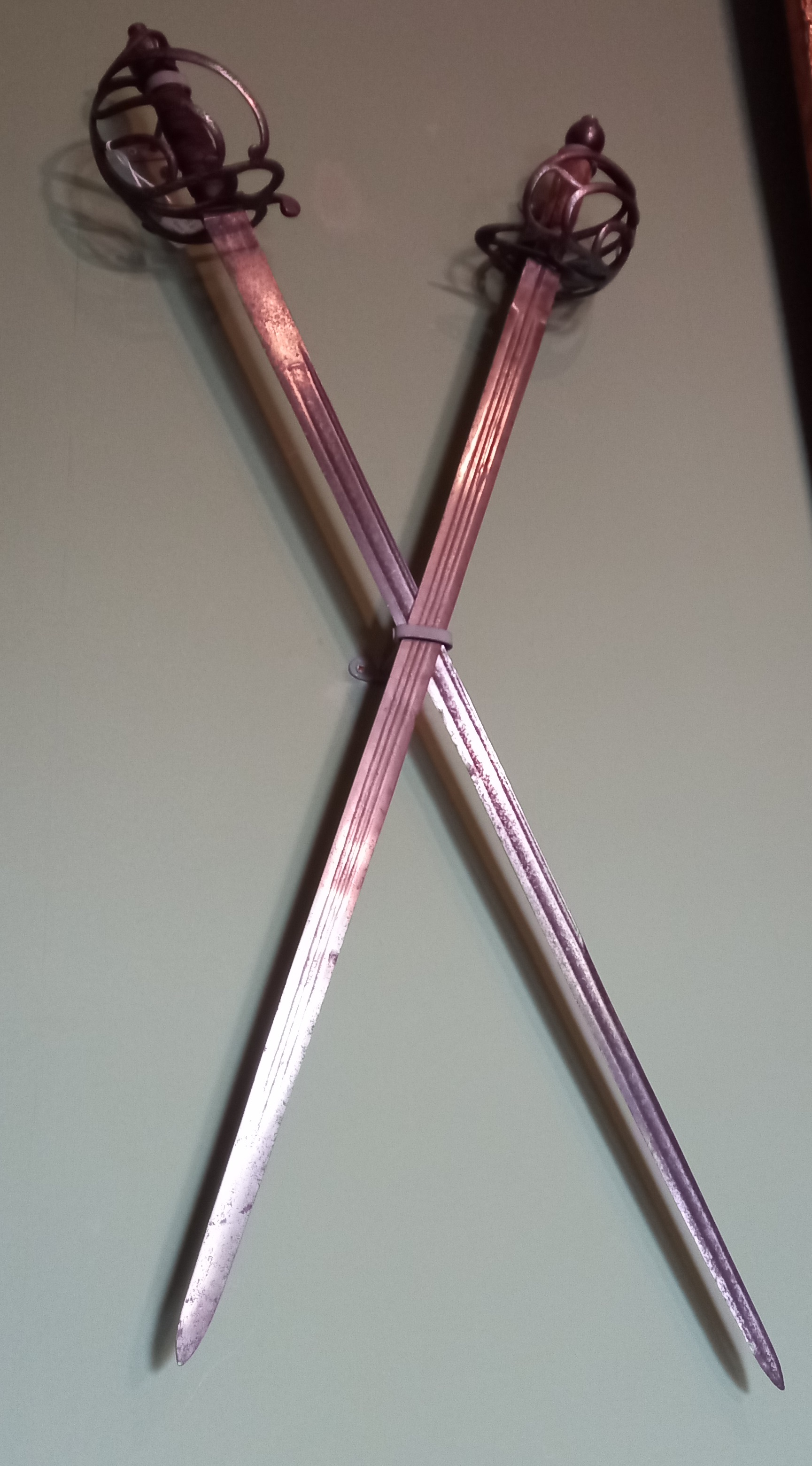 This is a typical of the sword carried by the famous Inniskilling Dragoons and it formed the basis for the first “Production Pattern” sword authorised in the army.

Both swords show the similarities and differences in swords in 100 years at a period when the United Kingdom of Britain was expanding the Empire abroad and also regularly at war in Western Europe. 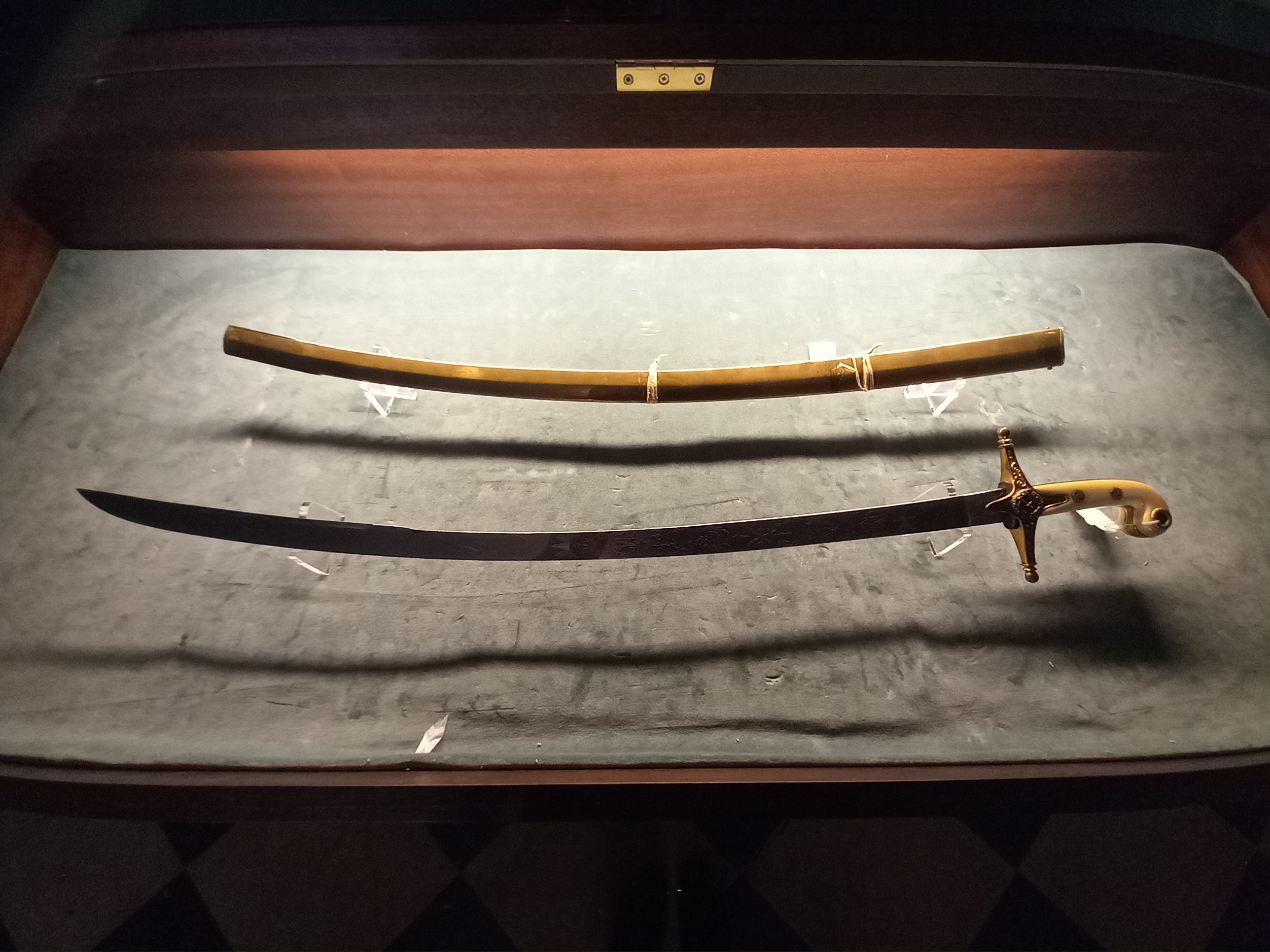 Marmaluke sword once owned by James Edward Marquis of Ormonde. Very decorative detail on each side of blade, from handle to 45 cm down the blade. 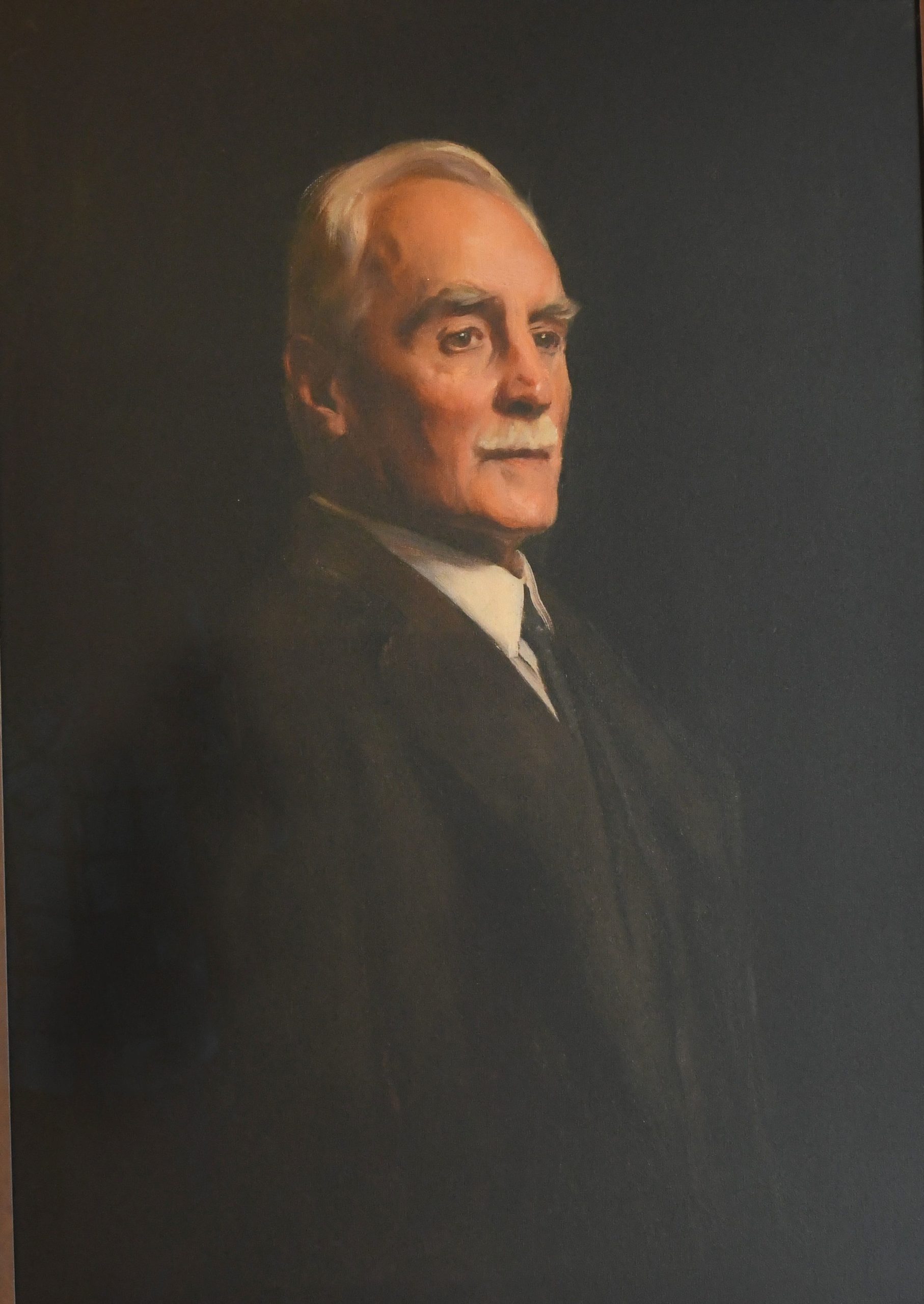 James Arthur was the brother and heir to James Edward Butler, 3rd Marquess of Ormonde. He was educated at Harrow and joined the army becoming a lieutenant in the 1st Life Guards. He was state steward to the Earl of Carnarvon when Lord Lieutenant of Ireland. In 1887 he married Ellen Stager, daughter of American General Anson Stager.

James Arthur is wearing dark suit with white shirt and navy tie. The original portrait was painted in 1928, when the sitter was almost 80.

James was the eldest son of Thomas Butler, Viscount Thurles, and his wife Elizabeth Poyntz. Following his father death in 1619, 9-year-old James became direct heir to the Ormond titles. In 1629 he married his cousin Elizabeth Preston reuniting the Ormond estates. He succeeded to the Ormond titles in 1633 on the death of his grand-father, Walter Butler, 11th Earl of Ormond.

Ormond is clad in armour, holding the baton of command, and wearing the blue ribbon of the Order of the Garter. A plumed helmet is to the sitter’s right. The pose is identical to Wright’s portrait of Murrough O’Brien, 1st Earl of Inchiquin (Manchester Art Galleries). It is a later copy based on Wright’s work, as the knotted wig is a feature of portraits of the 1690s and after.

James Arthur was the youngest son of James Arthur, 4th Marquess of Ormonde. Educated at Harrow, he served in both World Wars. He succeeded his brother James George Butler, 5th Marquess of Ormonde in 1949. In 1924, he married Jessie Carlos Clarke, daughter of Charles Carlos Clarke. In 1967 he sold the Castle to the Kilkenny Castle Restoration Committee for £50. Two years later it went into state ownership.

James Arthur is wearing the uniform of a Lieutenant in the 17th Lancers, note the badge of the unit on his collar “Death or Glory”. In this painting James Arthur is aged 23. 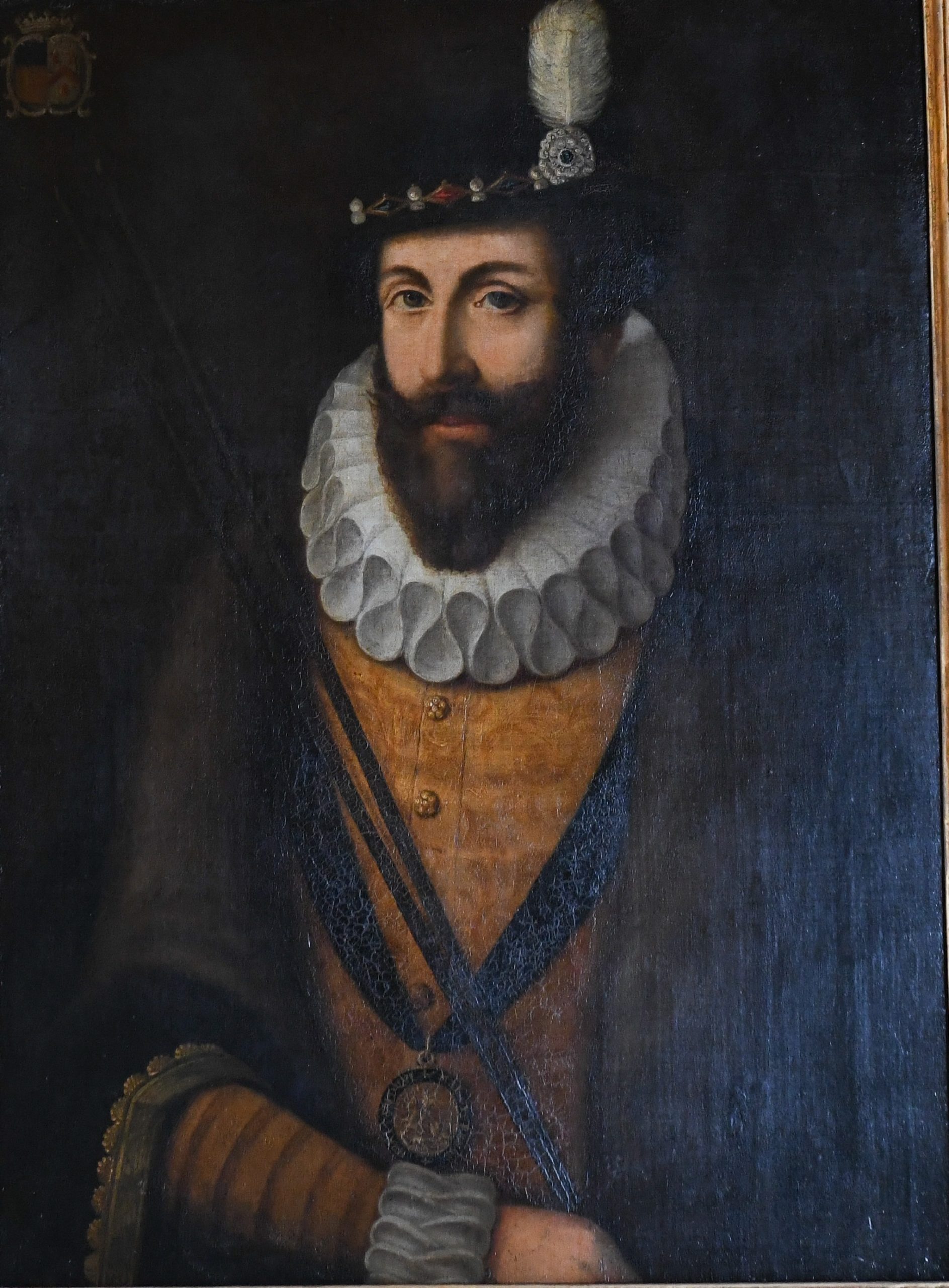 Thomas was the eldest son of James Butler, 9th Earl of Ormond, and his wife Joan Fitzgerald, daughter of the Earl of Desmond. Because he was dark-haired, he was known to his contemporaries as “Black Tom”or “Tomas Dubh”. As a young boy, Thomas was fostered with Rory O’More, son of the lord of Laois before being sent to London to be educated with the future Edward VI.  He was the first member of the Butler family to be brought up in the protestant faith. In 1546, he inherited the Ormond earldom following the sudden death of his father. He was highly regarded by Queen Elizabeth to whom he was related through her mother Anne Boleyn.  Anne Boleyn was the granddaughter of the 7th Earl of Ormond making Elizabeth and Thomas cousins. Thomas  married three times but left no heir and was succeeded by his nephew Walter Butler 11th Earl of Ormond. He died in 1614 and was buried in St Canice’s cathedral, Kilkenny.

James was the eldest surviving son of Thomas Butler , Earl Ossory, and his wife Amelia Nassau.  Following his father’s death in 1680, James became the heir to his grandfather, James Butler, 1st Duke of Ormond, whom he succeeded in 1688.

Following his involvement in a Jacobite rising, he was impeached and a year later a Bill of Attainder was passed against him.  His English and Scottish honours and his English estates were seized.  Ormonde fled to France.  He lived out his life in exile, died at Avignon in France and was buried in 1746 in Westminster Abbey.

James is wearing Garter robes. This is a crudely painted piece. The head is similar to that used in portraits by Dahl. 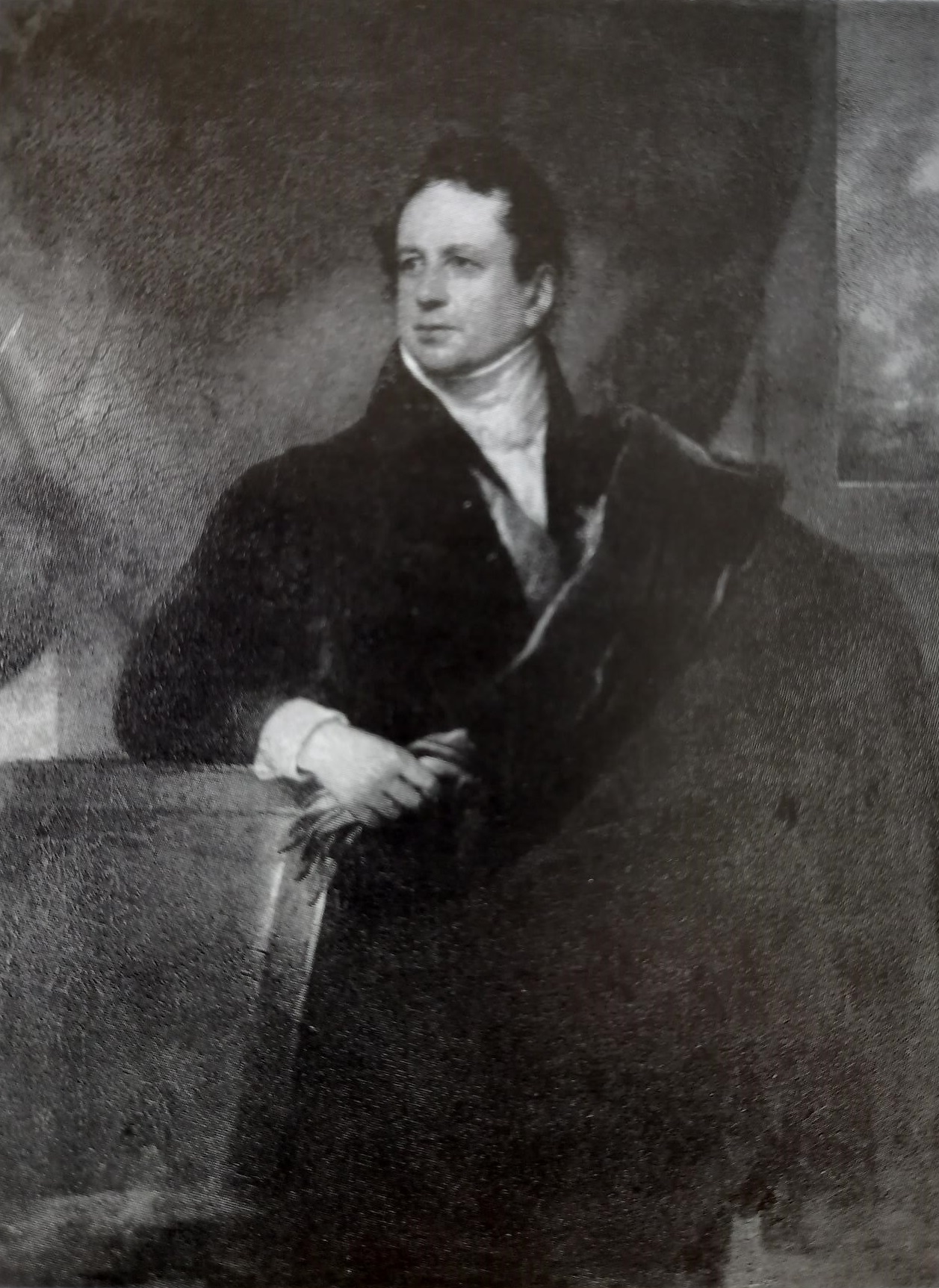 James was the third son of John Butler, 17th Earl of Ormonde and Lady Frances Susannah Anne Wandesforde. He succeeded his brother Walter as Earl of Ormonde in 1820, becoming one of the largest landowners in Ireland with an estate worth more than £20,000 a year. He was created Marquess of Ormonde in 1825 and officiated as Chief Butler of Ireland at the Coronation of George IV. He married Grace Louisa Staples in 1807, they had ten children. He died in Dublin in 1838 and was succeeded by his eldest son John.

In this portrait, the marquess is depicted wearing a dark coat with the blue ribbon of the Order of St Patrick. Rothwell, an Irish artist who had worked as Sir Thomas Lawrence’s chief assistant, was a highly regarded portrait painter. The swagger of the velvet cloak is a typical feature of fashionable portraits of this period.